Morris and Kunken in ‘Nikolai and the Others.’ (Photo by Joan Marcus)

Richard Nelson, Tony-winning book writer, Obie-winning playwright and former Yale Drama playwriting chair, is today best known for his ongoing saga about the Apple family. Each year for four years, culminating this fall, he has brought a new play to the Public Theater about a close-knit, articulate, politically aware family from Rhinebeck, N.Y., each play premiering on a historically significant date and set on the day it debuts. (The final installment will open on Nov. 22, 2013, the 50th anniversary of the Kennedy assassination.) These lauded plays, about the hopes and frustrations of liberal-leaning New Yorkers in the age of Obama, tend to unfold during a long family meal; there is well-wrought discussion, subtle revelation and layered character development, but typically little action.

So it goes with Mr. Nelson’s Nikolai and the Others, which opened Monday night in a Lincoln Center Theater production at the Mitzi Newhouse. This time the family, such as it is, is a group of Russian émigré artists and intellectuals, among them George Balanchine and Igor Stravinsky, at work on their ballet Orpheus, gathered for a weekend in the Connecticut woods. It is once again a play with a lot of discussion—the Playbill lists 18 characters—and the issues it takes up include the role of the artist, the struggles of the immigrant, and specifically those roles and struggles as they fit into the soft-power cultural Cold War. Once again there is little action. In this case, though, exploring half-century-old debates, it’s harder to keep that discussion vital.

It is 1948, and these Russians are gathered at the Westport farmhouse of Lucia Davidova (Haviland Morris), described in the Playbill as Balanchine’s “confidant,” which is to say one of several women here who are unrequitedly in love with him. A large meal is being prepared in honor of an aged, ailing guest, the revered set designer Sergey Sudeiken (Alvin Epstein), whose arrival they await. We slowly meet the group. The titular Nikolai is Nikolai Nabokov (Stephen Kunken), a composer who no longer composes but instead serves as a fixer—he has a business card from the Voice of America and indistinct sources of funding and influence, to be deployed as needed. Stravinsky (John Glover) is in from California and looks very Hollywood; his wife, Vera (Blair Brown), is Sudeiken’s ex-wife. And on and on: Natasha Nabokov (Kathryn Erbe), another “confidant” of Balanchine, is Nikolai’s ex-wife; the rehearsal pianist Kolya (Alan Schmuckler) is Sudeikin’s nephew.

The undisputed star of the group is Balanchine (a regal Michael Cerveris), and later, in the adjacent barn, he presents for the first time his dances for Orpheus. That’s when the conductor Serge Koussevitsky (Michael Rosen) turns up, bringing with him the State Department man Chip Bohlen, a fluent Russian speaker and, it later becomes apparent, Nikolai’s handler. He is the outsider, and his presence throws things off kilter. (A note from Mr. Nelson emphasizes that while the play is historically informed, it isn’t strictly historically accurate.)

David Cromer directs, and it’s both beautiful and fascinating to watch how he places and moves this sprawling cast around Marsha Ginsberg’s three-part set, in which rotating walls separate the yard from the house from the barn, the other spaces partially visible even when not at center stage. That cast is excellent, impressively imbuing each of these many characters with a recognizable personality. And I am by no means a balletomane, but watching Natalia Alsonso (as Balanchine’s wife, Maria Tallchief, a dancer) and Nicholas Magallanes (another dancer) perform portions of Orpheus, narrated by Mr. Cerveris as Balanchine, was breathtaking.

And still, Balanchine choreography notwithstanding, Nikolai and the Others doesn’t quite take flight. It is a lengthy, pleasant but unthrilling exploration of old questions that leaves us more or less where we began. If the key to Mr. Nelson’s Apple plays is that they aspire to burn with the so-called fierce urgency of now, Nikolai and the Others can’t help merely simmering in the mild intrigue of the past.

J.M. Barrie, the Victorian author and playwright, gave the world Peter Pan, the boy who wouldn’t grow up. On the evidence of This Side of Neverland, a pleasantly diverting and mildly intriguing evening of two Barrie one-act plays presented by the Pearl Theatre Company in its new home on far West 42nd Street, where it opened Sunday night, Barrie had a fascination with all sorts of alternate lives.

In Rosalind, the first play, a pleasantly contented middle-aged woman (Rachel Botchan) is on holiday from London, visiting a small Scottish town. She is the mother of a noted English actress, she says, and it is only when a young man on a walk nearby (a drily funny Sean McNall) stops in to get out of the rain, a young man who purports to be in love with her daughter, that it eventually becomes clear: mother and daughter are in fact the same person. (She asks by way of explanation, “Have you noticed there are no parts for middle-aged ladies?”) That is her double life: she is happily, glamorously living as a young woman in town, and happily, frumpily relaxing as an older one in the country.

In The Twelve Pound Look, meantime, a pompous Englishman (Bradford Cover) on the verge of being knighted sends out for a typist and is shocked when his equally surprised long-lost first wife (Ms. Botchan) arrives to do the job. He believes he understands women, as he keeps telling us; she reveals that she left all those years earlier, and chose to make it on her own, because she simply couldn’t bear being married to him. It is, especially in Victorian times, a shocking revelation to him; it’s also, again, a powerful vision of an alternative existence.

Both plays, if slight, are clever and full of wordplay, and J.R. Sullivan, the Pearl’s artistic director, directs them, and his small ensemble of actors (which also includes Carol Schultz and Vaishnavi Sharma), with charm. This Side of Neverland is, likewise, a slight, charming evening.

The British playwrighT Mike Barlett made a splash a year ago with his crackling, unnamable-in-the-Times Cock, a tense bisexual love triangle set in a bullring-like set. His brisk, compelling new work, Bull, which opened last week at 59E59 Theaters, seems at first to be a parallel battle, this time set in an office. But it’s not, and the play, directed by Clare Lizzimore, would be better served if it was presented as less of a companion piece.

Audience members entersthe theater to find a workplace version of a boxing ring in the center of the room, a raised, carpeted square with glass-and-rail walls in lieu of ropes and a water cooler in the corner; seating is arranged bleacher-like at each end of the room, and some observers stand on the floor around the “ring.” Three gray-suited actors, portraying two employees and their supervisor waiting for a meeting with the big boss (who will be laying one of them off), enter, and the set, with its echo of Cock’s bullring, suggests we’ll see a similar dynamic play out, alliances shifting among the three as they battle for workplace supremacy. As it becomes clear that two of them—Tony (Adam James), the supervisor, and Isobel (Eleanor Matsuura)—are united in their dislike of the third, Thomas (Sam Troughton), and conspiring against him—it is, despite the play’s intricate and very funny verbal jousting, a disappointment that the lines are so clearly and uninterestingly drawn.

But as Tony and Isobel continue to beat up on Thomas, emotionally and eventually physically, even after the big boss, Carter (Neil Stuke), fires him, Bull morphs instead into a fascinating study of abuse, of bullying, of total interpersonal annihilation. Tony and Isobel seem soulless, inhuman and corporate, each an Aaron Eckhart character in an early Neil LaBute film. They leave Thomas alone on the floor at the center of the ring, prone and utterly defeated. It’s shocking, visceral and a little scary.

As for Bull, it might not be quite that much of a knockout, but it sure packs a punch. 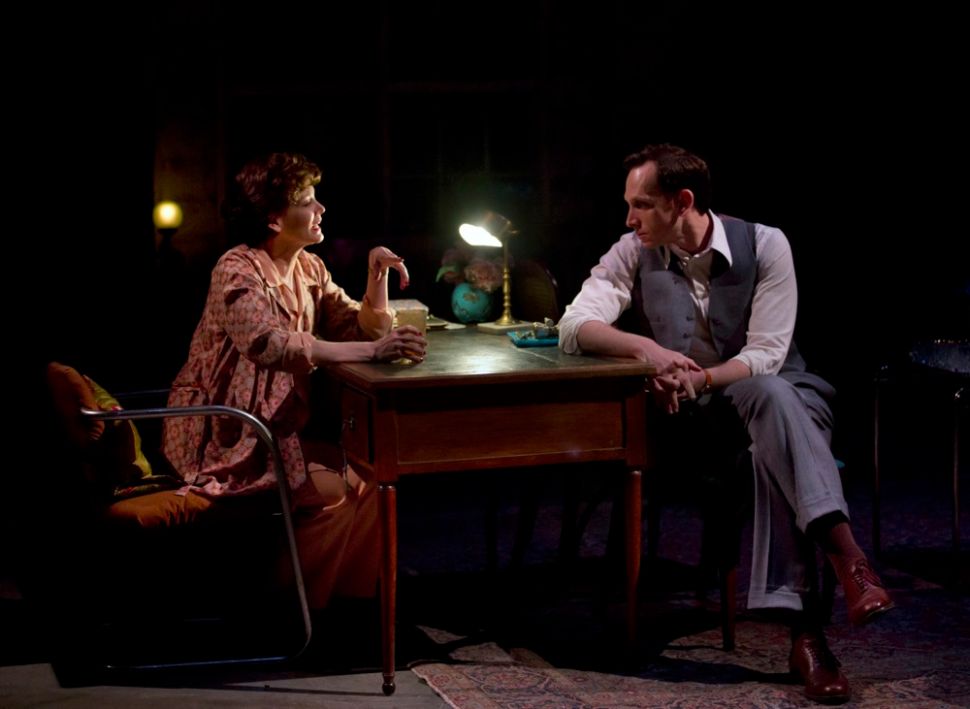