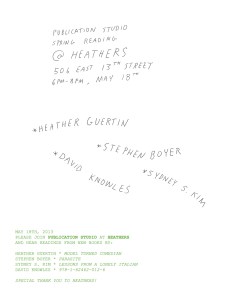 If the weather reports are to be believed, this is going to be one gorgeous Saturday in New York—a high of about 72, pretty much no chance of rain and just a few clouds in the sky.

It’s also shaping up to be a banner day for art books, with at least three major events on tap for May 18, which are listed below.

1. Erin Shirreff is having a book launch to mark the publication of a monograph tied to her shows at the Carleton University Art Gallery in Ottawa, the Agnes Etherington Art Centre in Kingston and the Contemporary Art Gallery in Vancouver. This is from 2 to 4 p.m. at Ms. Shirreff’s New York gallery, Lisa Cooley, at 107 Norfolk Street in Manhattan.

2. A bunch of authors who have released books on the redoubtable imprint Publication Studios will be reading at the redoubtable East Village bar Heathers, at 506 East 13th Street. The authors on tap are David Knowles, Heather Guertin, Sydney S. Kim and Stephen Boyer. I can only vouch for the quality of Ms. Guertin’s book, the uproarious and unusual Model Turned Comedian (2013), but I’d bet that the other ones are pretty good too. This is from 6 to 8 p.m., and will be a “fun, boozy, riotous affair,” according to organizers.

3. The introduction to this post was a little bit of an exaggeration. You actually don’t have to wait until Saturday to enjoy this last one. Primary Information has been posting a number of catalogues online as part of an exhibition/residency at ICA Philadelphia recently. They just loaded on a book by Yves Klein called Peintures from 1954, when the artist was just beginning his brutally short career. It begins with a wordless preface by Pascal Claude. Wild stuff.

Have a great one.