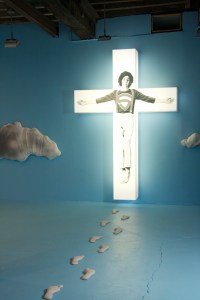 You can hear the booth of Fergus McCaffrey at Frieze before you actually see it. Installed are several works by Jack Early, an artist who had great success in the late ’80s before placing himself in an exile from which he has only recently emerged, appearing in shows at Brooklyn’s Southfirst Gallery. On view was Jack Early’s Ear Candy Machine, a glistening white phonograph with a speaker inside of the horn blasting music, resting in a black-lit room with a streak of rainbow paint on the floor. Elsewhere, there were cut-out sculptures of Yoko Ono, and one of Paul McCartney with a sign that read, “JOHN IS THE ONE THAT IS DEAD ACTUALLY.”

“It’s this wonderful mix of redemption, which of course Americans love, and sincerity mixed with mischievousness,” Mr. McCaffrey said.

In another section of the booth, a crucifix (composed of light boxes) hung on a wall, emblazoned with the image of Christ–from the Broadway production Godspell. The room–called WWJD, which is for sale as a complete installation for $70,000–was painted light blue, and covered with plush clouds. Out of an iPod, hooked up to speakers, a composition by Mr. Early was playing loudly. It’s called “Hey Jesus” and Mr. McCaffrey described it as “kind of a Led Zeppelin 24-minute guitar solo, which he’s singing along to.” (“The optimism is infectious,” he added.)

Instead of the usual formal uniform worn by dealers at fairs, Mr. McCaffrey was wearing a T-shirt with the song’s lyrics printed on it:

Will you make me lose my mind?

I’ve heard the angels sing while the devil