Cycling is a wonderful option for those energetic souls who prefer pedaling to a bus, cab or subway. The cost of a bike is relatively cheap as well—you can get a decent bike, one that will last you many years, at a local shop for less than the price of dinner for two at some of the city’s finer dining establishments.

So why, then, do we have to share bikes?

In inaugurating its bike-share program, New York City has now joined the likes of urban thought leaders such as Madison, Wis., and Minneapolis, Minn. Mayor Bloomberg, who deserves an honorary yellow jersey for his contributions to cycling, kicked off the program, along with his transportation commissioner, Janette Sadik-Khan, designer of the rightfully mocked empty thoroughfares known as bike lanes.

The bike-share program allows users, who pay a weekly rate of $25 or a daily rate of $9.95, to borrow a bike to ride from one designated station to another. Adherents insist that this will lead to great changes not only in commuting habits but in the city’s culture—after all, sharing is caring.

What’s more likely is that a few earnest users will take advantage of this city-run program to feel morally superior to those who, for whatever reason, prefer not to sweat their way to a meeting. Never mind the threats to public safety (the Fire Department has expressed concerns about staging its vehicles near bike stations) and the inevitability of accidents involving goofy tourists who can’t even walk on the sidewalks without fouling things up.

The bike-share program, however innocent its intent, represents another governmental incursion into the private marketplace. Rather than encourage business to develop creative solutions to gridlock, the government has imposed its own solution.

But what does that matter, if a few people can feel superior to the rest of us? 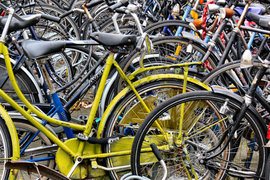