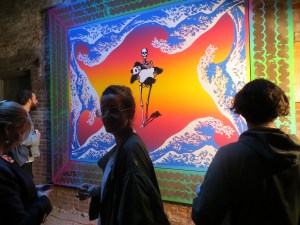 A young man and woman, one tall, one short, stood flanking the door of what was otherwise a nondescript, one-story building on West 15th Street Wednesday evening. It had stopped raining, and pale yellow light landed on the peeling gray paint of the façade as the sun started to consider setting. The two gatekeepers held clipboards loaded with sheaves of white paper. Was there a list? Greeting arrivals, the clipboard swiveled around, and the young woman holding it produced a pen. “Sign here and here,” she said. They were waivers, releasing the hosts from liability in the event of injury or death. No one gave them much scrutiny, signing quickly.

Inside, the industrial space was about as raw as it gets. A long dirt floor studded with the occasional muddy puddle led to the back of the building, where Rob Pruitt’s candy-colored installation popped out from its dusty surroundings. A (presumably) life-size neon dinosaur flocked with black velvet stripes stared into a large painting depicting a skeleton, striding forward as it cradled a panda. The last panda.

“I made a show of 12 panda bears in 1999, and then I was making what I considered to be the very last panda bear and I wanted to put it in the same space,” said Mr. Pruitt, who was wearing all white down to his spotless canvas sneakers. “This was our clubhouse 10 years ago.” The room used to be Gavin Brown’s gallery (his headquarters are now on Greenwich Street) and Mr. Pruitt still dearly remembers its glory days. He pointed to a skylight near the entrance of the now-gutted space. “This part was the bar, and there was a disco floor just like in the film Saturday Night Fever made my Piotr Uklański,” he said. “It looked phenomenal. It was like getting drunk on a work of art every night.”

By the time Mr. Pruitt arrived at his opening, there was a neon green rope manned by a security guard holding one end, letting people in when others left. Earlier, when barely anyone had arrived and the earliest visitors were claiming the free T-shirts promised to the first 100 people, the space was practically silent. With only a few visitors, and little in the way of explanation—no wall text, no press release, no checklist—viewers just reverently approached the installation at the end of the space and snapped a few photos on their cellphones without a word. Rirkrit Tiravanija, who arrived wearing an immaculate black suit with satin lapels and rose-tinted glasses, described the scene to someone on a cellphone. “They’re taking pictures of it,” he said of the crowd documenting the dinosaur, before using said phone to snap a picture of people snapping pictures.

The walls were lined with piles of every industrial item imaginable, punctuated by remnants of the private party the night before: wheelbarrows, welding helmets, champagne bottles, plastic buckets, bits of drywall bearing drawings, tangled extension cords, paint cans and table saws. One side of the space was outfitted with wooden cubbies containing work clothes and personal effects like hairbrushes. “Miguelito” was written on one in a combination of upper- and lowercase letters. Mounted on this was a pair of what appeared to be bison horns that were serving as a coat rack. 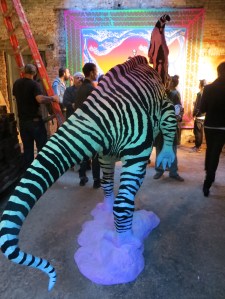 The dinosaur species, with its long cranial crest, was a matter of some controversy. “It’s a raptor,” said Mr. Pruitt. Of the veloci- variety, we wondered? “I think so. Maybe I’m wrong.” (It looks more like a Parasaurolophus to us, but we’re not paleontologists.) A Mister Softee ice cream truck arrived outside and began doling out free cones as the endlessly obliging Mr. Pruitt signed shirts on the hood of a car, giving each skeleton a playfully pornographic speech bubble.

The quiet, low-key easiness of Mr. Pruitt’s opening contrasted sharply with the ambiance of the Frieze New York launch party at MoMA PS1 later that night, where electronic music thudded from the courtyard dome and young patrons pressed to get at the open bar.

The party peaked when Mykki Blanco delivered an unnervingly commanding performance, alternating between sassy spoken word and rap backed up by beats. Her wig was wavy, long and auburn. Her black crop top was tight. Her high-waisted, equally form-fitting skirt glowed green in the lights trained on the stage.

“I’m going to keep this short and sweet like my outfits,” rapped Blanco, who left immediately after the set to catch a flight to the U.K. to kick off a European tour.

MoMA PS1’s ecological extravaganza “EXPO 1” opens to the public on Sunday, and a few pieces of the pieces included in it were visible. The interior balcony overlooking the basement floor to the left of the museum entrance offered visitors views of Meg Webster’s Pool (1998), an artificial pond fed by a corrugated plastic tube pouring water from the ceiling and occupied by koi fish, who flitted around in tangerine formations. They would form perfect parades, nose to tail, before breaking apart and congregating in smaller clusters behind the lily pads and boulders. Watching them was not unlike witnessing the movements of the crowd in the courtyard, circulating here and there while sipping Absolut vodka and blueberry juice out of paper straws that looked like pixie sticks.

There were a few ambitious fashion statements (a white mesh cape hinged to an architectural dress) and a few bold ones (booty shorts braving the chilly evening air), but most of the predominantly young crowd opted for flattering, if restrained, ensembles involving blazers.

A young woman named Liz, who was guarding the pool downstairs, said that spending the night by the piece was not always tranquil. “I half feel like I’m in some majestic space, and half like I’m at a power plant,” she said. “It’s calming and grating.” 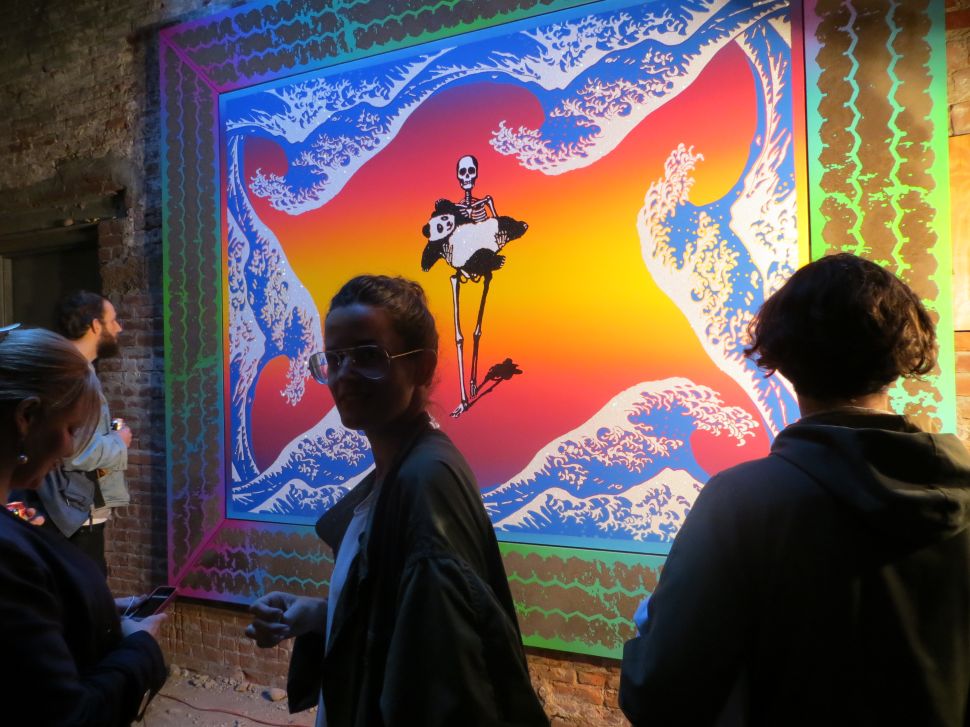