In the developing back chatter among Union County Democrats about who should succeed outgoing County Democratic Chair Charlotte DeFilippo, the name of state Sen. Ray Lesniak (D-20) surfaced in earnest this week.

Lesniak laughed at the suggestion at first, according to Democrats in the inner sanctum of Union power.

But he later warmed to the idea, exhilarated by his Democratic Primary, sources say.

“I haven’t ruled it out,” Lesniak told PolitickerNJ.com, referring to the chairmanship. “This campaign has energized me.”

The veteran senator (and former state party chairman) faces Roselle Board of Education President Donna Obe in the Democratic Primary for his LD 20 Senate seat.

Others interested or among those names in discussion include Fanwood Mayor Colleen Mahr and Elizabeth Mayor Chris Bollwage.

A source told PolitickerNJ.com that Lesniak would task his staffers to the day-to-day operations of the party and roll in “for the big stuff.” 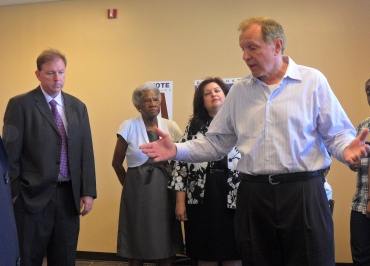