Lewis Lapham, the former longtime editor of Harper’s Magazine, started smoking in 1952, and he’s been going at it with zeal ever since.

“I developed an early passionate attachment,” Mr. Lapham, 78, said last night in his deep, mentholated monotone, “which could be considered an addiction.”

Mr. Lapham was discussing his smoking habit with the comedian Katie Halper on a small stage at Chez Andre at The Standard East Village. The talk was part of a conversation series on obsessions, which runs through Saturday, tied to the PEN World Voices Festival. (Tonight, Andrew Solomon will focus on the subject of sleep.)

But Mr. Lapham didn’t necessarily agree with the theme of the series, at least as it related to him. “I don’t know if you could call it an obsession,” Mr. Lapham said with the air of an aristocrat. “I call it a pleasure.”

He wore a natty pinstriped suit and big tortoise-shell glasses, occasionally pausing to puff on a black electronic cigarette, the tip of which illuminated bright blue every time he inhaled.

With that in mind, one can imagine that Mr. Lapham, who burns through three packs of Parliaments a day, might feel ostracized by the city’s anti-smoking measures. He started using electronic cigarettes, he said, four days ago, worried that if he continues to smoke in the office of Lapham’s Quarterly, the literary journal he founded in 2007 after retiring from Harper’s, he will be evicted.

“I look at the anti-smoking law as a form of sumptuary law,” Mr. Lapham told the crowd. “The tax and the oppression, for the most part, land on the poor.”

Mr. Lapham expanded on that idea. “The freedoms in this country have been diminished over the course of my lifetime,” he mused. “I don’t like being told that I can’t do something.”

He acknowledged that the smell of tobacco might be offensive to those who don’t smoke. “But on the other hand,” Mr. Lapham reasoned, “there are a lot of offensive smells.” The audience laughed.

All humor aside, though, what are we to make of Mr. Lapham’s health? His teeth looked brown and mossy from a distance, and he occasionally let out a crackling cough, the sound of which could only be made by a smoker of 61 years.

Mr. Lapham casually conceded that he has “a chronic case of bronchitis,” but it didn’t seem that he was willing to admit that cigarettes are as bad for the health as everyone thinks.

“I’m 78, and the odds of my dying of tobacco poisoning are very slim,” Mr. Lapham said. “There’s very little proof, at least according to my physician, connecting smoking to death,” he added, tongue slightly in cheek.

That doesn’t mean, however, that he hasn’t attempted to kick the habit. “I’ve tried to give it up once,” Mr. Lapham said. He paused for a moment. “No, twice!”

About 10 years ago, on the Today show, Ralph Nader offered to buy 1,000 subscriptions to Harper’s if Mr. Lapham would give up smoking for two years.

“I only made it five hours,” Mr. Lapham said. 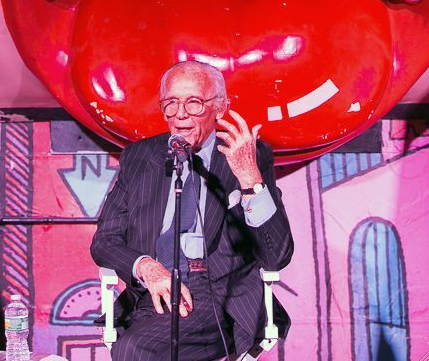