The NY Department of Economic Development is forcing a beloved New York coffee shop to change its logo.

In a letter sent to Everyman Espresso, the department stated that the shop’s logo violated federal trademark law and needed to be removed immediately. The department said the logo was “confusingly similar” to the New York state logo “I ♥ NY®,” created by Milton Glaser in the mid-1970s.

The shop’s logo originated from a tattoo on co-owner Sam Penix right fist.  In 2009, he had “I (coffee cup) NY” inked across his fingers and eventually, the fist found its way onto the store’s merchandise.

Everyman Espresso had been ordered to change its window decals at their East Village and SoHo locations and stop selling all merchandise with the offending logo. On top of that, Everyman has to account for all profit during the period when the logo was used to help set the appropriate penalty, Gothamist reported.

“The money lost through merchandise is nothing compared to the attack on our brand, which is even harder to quantity,” shop Manager Sam Lewontin told The Observer. “This directly affects our ability to put our brand into the world and let everyone know what coffee means in New York.”

This is not the first time the state has filed reports of trademark infringement on the “I ♥ NY®” logo. The Times reported that more than 100 cease-and-desist letters were sent last year alone and thousands have been sent in the 36 years since the logo was created. Mr. Penix told The Times that what the state department is doing is “basically extortion,” and ironic that they are being “threatened by the entity that has vowed to grow” New York business.

Customers are steaming over the logo’s removal, some turning to social media sites like Twitter to show their distain. The hashtag “hands off my cup” began circulating in the last week in support of the shop’s logo.

“We strongly disagree with the department’s decision and we won’t just lay down about this,” Mr. Lewontin told The Observer.

New Yorkers are brewing anger over the department’s decision, turning to social media to get their opinions heard.

SoHo coffee shop Everyman Espresso is shaking its fist at the NY Department of Economic Development after being forced to take down their ‘confusingly similar’ logo. New Yorkers are brewing anger over the department’s decision, turning to social media to get their opinions heard. 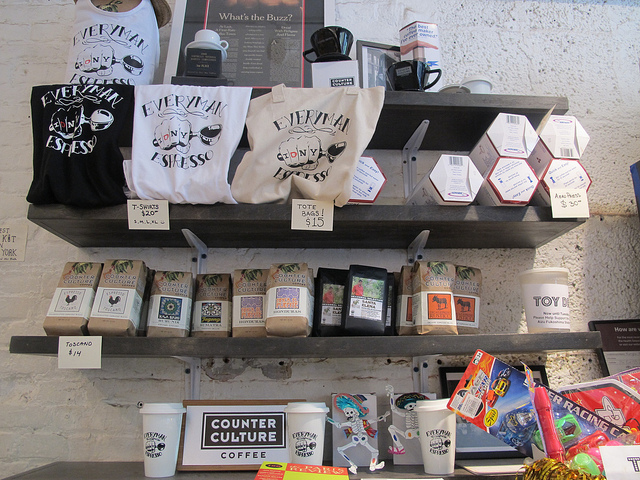