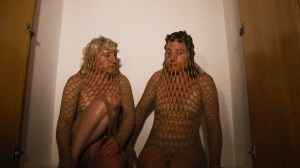 Still from Maria Petschnig’s ‘Petschsniggle’ (2013). (Courtesy the artist and On Stellar Rays)

Everything in our virtual life is clean, transparent, and meaningless. But there’s a nagging disconnect between a body image that’s been catastrophically challenged and dissolved and the body itself, which hasn’t gone anywhere. We’re like children playing hide-and-seek in a house we no longer believe in. So before projecting her videos Vasistas and Petschsniggle onto the walls of On Stellar Rays, Austrian-born, New York-based artist Maria Petschnig covered those walls with hastily slapped up wood paneling and installed a drop ceiling of acoustic tiles. This ought to be claustrophobically ominous, but instead of evoking that dread, it simply alludes to it. Gopa, a kind of drooping, faceless velvet head mounted on the wall, or Mycroft and Sack, two mattresses stuffed like diapers or death masks with lumpy padding, likewise bring to mind Louise Bourgeois sculptures under glass: the language is the same, but it’s been aestheticized or intellectualized in a way that leaves the viewer fascinatingly unsure of her footing. The video Petschsniggle begins with a shot of two identical naked women—Ms. Petschnig and her twin sister—in tight rope nets, laid out in an empty bathtub as if to dry or air-drown. For about seven minutes, in a house decorated just like the gallery, Ms. Petschnig and her twin play twin games: they ride down the stairs on a mattress, they ride each other like horses. They cut a peeled cucumber into pieces. In the bathtub, wearing masks made of stockings, the artist’s sister carefully leans over her and spits on her face while Ms. Petschnig tries not to laugh; in another cut, standing and soapy, their eyes meet for a moment, but no message is exchanged. Maybe a sharper comparison would be to the giddy, blasphemous moment early in the last century when words like “damn” and “fuck” began to explode across the public vernacular even as they rapidly lost their force: in most mythologies, dismemberment is a time of new beginnings.