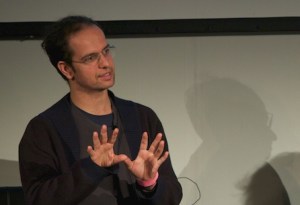 Ann Lee, which was first performed at the 2011 Manchester International Festival, does not appear to hinge on audience participation as much as say, This Progress, his 2010 Guggenheim project, in which visitors engaged in conversations with various people while ascending the museum’s rotunda. Ann Lee reportedly involves a young girl personifying an eponymous manga character that French artists Pierre Huyghe and Philippe Parreno purchased as material for artworks. The two have asked a number of artists to make art around the purple-haired teen over the years. (Looking forward to hearing what that’s been like for her.)

Despite the unconventional nature of Mr. Sehgal’s work, this is not the first time it has graced an art fair. At the 2004 edition of Art Basel, he presented This is Competition, which was staged between two adjacent galleries who represent him, Jan Mot, of Brussels and Mexico City, and Johnen + Schöttle, of Cologne. The piece stipulated that gallery staff could only say one word at a time, forcing the dealers to cooperate, alternating words, in order to discuss the work. At the Wrong Gallery’s booth at the 2005 Frieze London, Mr. Sehgal showed This is right, in which a young boy and girl greeted visitors and proceeded to explain and perform five earlier pieces that could be purchased.

Happily, collectors acquiring a Sehgal need not worry about shipping costs. Buyers are taught how to perform the pieces they purchase and the sales of Mr. Sehgal’s dematerialized works take place orally. Museums typically bring along a lawyer or notary to make note of the transaction.