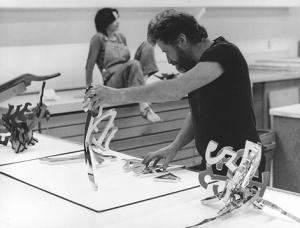 The sculptor Mark di Suvero was awarded a gold medal by the American Academy of Art and Letters at a ceremony at the academy’s headquarters last night.

He joins some good company: the novelist E.L. Doctorow was also awarded a gold medal, and three new members were inducted into the elite group–Richard Tuttle, Terry Winters and Ward Just. Bob Dylan was also named an honorary member (the academy couldn’t decide whether to honor him for songwriting or music; presumably, his other role as a painter was not a consideration).

Mr. Dylan, according to Rolling Stone, did not show up at the ceremony, which had a keynote address delivered by the writer Michael Chabon.