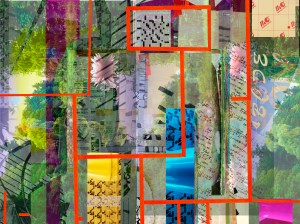 Two years after inaugurating 47 Canal with a barn burner of a solo show, New York-based photographer Michele Abeles is back, and not a moment too soon. Ms. Abeles is, to my mind, the best among a promising pack of young artists, like Travess Smalley, Lucas Blalock and Talia Chetrit, who use both analog and digital means to create still lifes and abstractions that feel bracingly new: deadpan and strange and attuned to the freewheeling networks in which images circulate today.

Ms. Abeles has made most of the nine photographs here by using a computer to collage images from a variety of sources into frenetic but tight and intelligent compositions, as if a series of computer windows have been collapsed onto each other. Images of ropes, chains and ferns share space with newspapers, verdant forests and a lounging cat. Many of the elements recur across multiple photographs, and some are recycled from her previous pieces. They’re bewitching.

These networks of images sit atop backgrounds that recall the tropics—gradient fields of light oranges, yellows, teals and pinks that flow into one another. Photoshop wizardry abounds. Thankfully, unlike certain of her fellow travelers, Ms. Abeles never indulges the fashion for fetishizing bad early computer-graphics design, a gesture that is already aging badly. Instead she’s occupying a space between good and bad taste, just beyond the bounds of where things start to get too tacky or too cutely clever. The scattering of computer images and shapes across those washes of color in Transparencies II (all works 2013) is unrepentantly pretty and positively tranquil while defying any sort of cohesive reading. As with an Impressionist bowl of fruit, the best response is to just keep marveling.

With Ms. Abeles, there is always a twist. (This is the artist who sent Paz de la Huerta to impersonate her at the Rob Pruitt Awards.) Transparencies I is the same photo as its sequel, but Ms. Abeles has painted a Picabian cut-apart nude woman in red atop the photograph’s glass, adding one more window—this one physical. And then there is Young-Girl, a haunting black-and-white portrait of the artist Marie Kalberg against a white background, as fearsome and still as one of the wolves or owls in the photos that Ms. Abeles was known for before she ventured into collage. It’s a straight photograph, with not a digital trick in sight. It underscores the potency of a medium that is currently enjoying a rich moment, and which Ms. Abeles is leading with brio and grace.