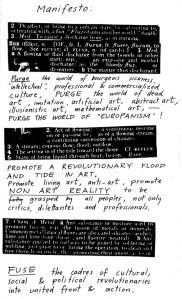 The Museum of Modern Art’s Inside/Out blog carries news from archivist Julia Pelta Feldman that the archives of the Gilbert and Lila Silverman Fluxus Collection—the world’s largest private Fluxus trove, which was donated to the museum in 2008—are now available to researchers, after years of cataloguing efforts by MoMA staff. (Thanks to art historian Matthew Israel for tipping us off to the news.)

Fluxus was started as a publishing company by artist and Soho loft pioneer George Maciunas in 1962 and eventually became an international and wide-ranging avant-garde movement with a particular focus on performance.

Here’s Ms. Feldman on MoMA’s relationship to the irreverent movement:

“It’s no secret that MoMA didn’t collect many Fluxus works in the 1960s and 1970s, at the time of their creation, which means that the Silverman Collection fills a very significant gap. But in processing the archives, I came to understand our forebears’ reluctance: Fluxus is too fluid, too rebellious, too anti-institutional to enter an institution without a fight. It’s too many things at once.”

Ms. Feldman’s full piece is available over at Inside/Out (it includes some great images), and here is the finding aid for the archives.