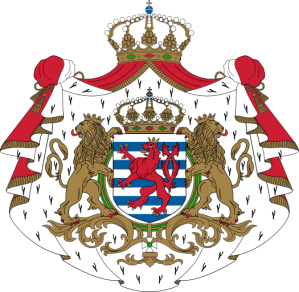 The coat of arms of the Grand Duchy of Luxembourg. (Courtesy Wikimedia)

Twenty Frank Lloyd Wright homes are on the market. Living in one may sound glamorous, but it is may be a lot of work. [WSJ]

Here is a profile of the artist Jeffrey Gibson. [NYT]

Paddle8 is looking to buy a stake in Artnet. [The Art Newspaper]

A roundtable discussion about the changing nature of photography. [The Guardian]

Here’s an interview with Ellsworth Kelly, who turns 90 on May 31 and whose “Chatham Series” goes on view at MoMA this month: “But one can’t help but encourage the artist to talk about, for instance, his brief encounter with Pablo Picasso in Paris after World War II, as Picasso’s chauffeured car squeezed past him on a narrow street: “He saw me and smiled and said, ‘Do we know each other?’ And it was almost like, ‘Come in.’ And my French was so bad I said [to myself], ‘If I get into that car, he’ll throw me out in the next five minutes.’ “” [WSJ]

Some nice news: the first “stock exchange for art” has gone into liquidation in the courts of Luxembourg. [Financial Times]