A video of a taxi driver giving away candy has warmed our bitter hearts. It reminded us that even though cab drivers are more than people that refuse to take us Brooklyn. Thusly, we’ve rounded up a list of all the most amazing cabbies that have graced the New York City streets.

Mansoon Khalid has become famous around the city for encouraging customers to grab handfuls of the free candy he leaves in the back of his taxi, accompanied by coloured lights and upbeat dance music. He said he began the sweet escape after the death of his young son, when he realised that bringing the doctors sugary treats made him feel better.

Jack Alvo hit the news earlier this year when he shared his incredible story of how he lost his $250,000 year job at Morgan Stanley and ended up driving a cab. His aptitude for figures and hard-working spirit have come in handy on the mean streets of Manhattan, where he now works to support his wife and family. He hasn’t entirely given up his financial ambitions, keeping a stack of resumes in the back of the cab for potential employers.

Johnnie “Spider” Footman, now 93 years old, began taking passengers around the city back in 1937 and is still going strong. He counts John Wayne and Rock Hudson among his most famous fares, but admits that he struggles to remember the rest. Despite his age, he passed a recent medical test, giving him a licence until 2014. 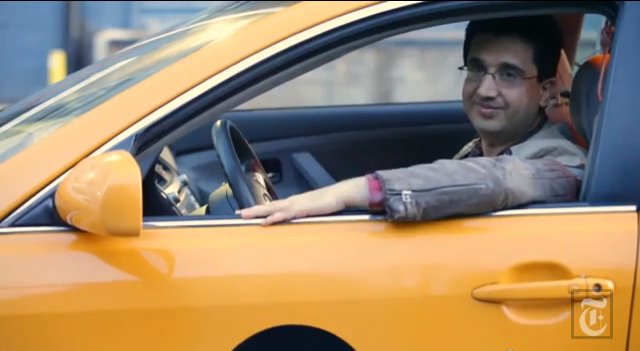