ROSELLE – The platform jutted theatrically above the crowd, giving each speaker an opportunity to indulge a papal air, or at least affect something of the bearing of Juan Peron.

Mayor Jamel Holley enlisted the aid of gubernatorial candidate Barbara Buono and Newark Mayor Cory Booker to build up the chief protagonist: state Sen. Ray Lesniak (D-20), whose place on the balcony could not disguise the fact that he’s in a dogfight, arguably the toughest of his long legislative career.

“He’s rich – so what?” Holley said in reaction to the barrage of opposition mail zapping his political mentor for amassing wealth as an attorney.

“He cares about the least among us,” Booker said of the senator, as he peppered the room with a montage of Booker standards.

“My mission to expand treatment for non violent drug offenders and second chance offenders is not only a passion of mine but resonates through the entire district,” said Lesniak, who has the financial heft of the Trenton establishment behind him as he describes being gratified by the Holley-generated crowd.

“Corporate greed,” denounced Lesniak’s political enemy, Rafael Fajardo, when he heard about the party at the Central Park Roselle club.

Prior to the politicians taking over last night, an entertainer with a microphone worked the crowd, chanting the names of Buono and Lesniak in tandem, and there was some significance in that, at the heart of an ongoing drama in the Democratic Party.

In charge of stirring up local love for the incumbent and ever the gracious host with 250 people taking turns nibbling at his ear, Holley crammed the bar and sushi lounge where Le Chic and the Black Eyed Peas drowned out the animated spoken messages of gigantic, wall projected moving images of Lesniak.

Roselle happens to be the home of Lesniak’s opponent, Board of Education President Donna Obe, whose candidacy is powered by the political organization otherwise known as the Elizabeth Board of Education (EBOE), headed by Fajardo.

Two years ago Lesniak ran against the same outfit with the benefit of his running mate, Assemblyman Joe Cryan, (D-20), engaged in his own back-against-the-wall re-election effort. This time, the EBOE decided not to run against Cryan – or Assemblywoman Annette Quijano (D-20) – as the powerful Elizabeth-based movement takes singular aim at the veteran senator.

“My opponent has run a negative and slanderous campaign,” said Lesniak. “It’s difficult opening the mailbox, which is why it’s uplifting to feel the love of the crowd. I’m staying positive public, because I think the public is fed up with all the negativity.”

A Buono inner circle player, Cryan was not in the room among the revelers. Two years ago he would have been on that balcony with the others. But not on this night.

A source told PolitickerNJ.com the root of the two ticket mates’ less than cozy relations is Lesniak’s decision, which he made as early as last December, long before the assemblyman knew he wouldn’t have an opponent, to use a separate campaign team from the one Cryan employed in 2011.

Many Union County insiders credit Cryan’s local party machine with saving the senator in ‘11. This time, regardless of the Elizabeth Board of Education’s strategy, Lesniak wanted oversight of the war room and a better field operation in Elizabeth, and he wanted to prove he could win with a return to his own sense of retail politics. “Ray is working his butt off,” a Lesniak partisan told PolitickerNJ.com.

While not fighting for his own political life, Cryan is helping Lesniak, said the senator, who has every confidence Cryan will be there in strength for him on Election Day. The heavy Buono optics at Lesniak’s fundraiser suggest the senator’s willingness to weld himself to the top of the ticket.

Cryan happens to be a member of Buono’s inner campaign circle.

But the other part of the two politicians’ source of turbulence – and friction – has to do with the fact that Lesniak has maintained a solid working relationship with the South Jersey Democratic Party and Senate President Steve Sweeney, (D-3), who’s contributing to Lesniak’s re-election effort, while trying to weaken Cryan.

“He’s tremendously reinforced my support with the building trades,” the senator said of the Senate president, whose coffers include a $6,000 check from the ironworkers.

Sweeney and Cryan detest each other politically, a dynamic never more evident than right now as Sweeney seeks the derailment of Buono’s choice for the state party chairmanship: Assemblyman Jason O’Donnell, (D-31), one of Cryan’s closest allies in the Democratic caucus.

So while he enjoys the deprivation of a primary candidate in LD20, Cryan has sufficient opposition in the larger context of state politics to stay busy, starting with Sweeney, as the assemblyman works to counter the Senate president from South Jersey and secure the chairmanship for the assemblyman from Bayonne.

Powerful people in the party, including Sweeney and Assembly Speaker Sheila Oliver (D-34), don’t want O’Donnell as state chairman, partly to punish Cryan, who tried to take the party in another direction from them in an effort to create more contrast with Gov. Chris Christie.

In response to the fiasco and the ongoing backroom war between a powerful political donor and his brawl-prone district-mate, Lesniak said he’s focused on his own Democratic Primary.

But late in the week, forces including representatives from U.S. Sen. Bob Menendez, (D-NJ), Sweeney, and Essex County Executive Joe DiVincenzo attempted to dredge up an alternative to O’Donnell, a list Lesniak couldn’t escape.

Stellato took himself out of it almost immediately. Word is Menendez liked the idea of Stellato. Big, important county. Scene of the battleground 38th District contest. A veteran. But Stellato said he stands with Passaic County Democratic Committee Chairman John Currie, and Currie is all in with O’Donnell.

Buono’s people first offered the chairmanship to Currie and he said no, so they moved on; by the time O’Donnell’s opponents circled back on the Passaic Chairman two weeks ago in attempt to short-circuit O’Donnell by appealing to party gravitas, Currie was already locked in by virtue of his earlier refusal.

And Stellato was locked in, too.

Sarlo’s name surfaced, and while he was honored and flattered to be receiving calls Friday, the Bergen senator’s chief of staff said the senator isn’t seeking the state chairmanship.

A source described the other name kicking around for state chair: Lesniak’s, as mostly an effort beyond Union County to needle Cryan. The senator waved it off as a distraction.

“I love Steve (Sweeney),” said Morris County Democratic Chairman Lou Candura, “but I already committed to saying Barbara (Buono) should have her own choice as state party chair. How do I do back on that?”

Menendez’s entry into the fray,  a consequence of the senator seeing O’Donnell as a vestige of Menendez’s political enemy HCDO Chairman Mark Smith – made the dimensions of O’Donnell angst appear larger than simply a Camden County operative making probing phone calls.

Himself a former state party chair, Cryan remained confident of his own connections in the state party committee, and the preponderance of support from county party leadership for Buono’s state chair choice.

Cryan’s play on behalf of Buono and O’Donnell may spill into county politics, as veteran Union County Democratic Committee Chair Charlotte DeFilippo is set to retire in June. Chairman of the Union Township Democratic Party, Cryan commands 100 out of 400 county committee votes.

As much as he wants O’Donnell  in as state party chairman, Assemblyman Jerry Green, (D-22), – friendly with South Jersey – wants the chairmanship of Union County. South Jersey shows signs of liking a leg into Union, a source told PolitickerNJ.com.

Cryan could end up trading his support for Green as county chairman for the rest of Union’s support for O’Donnell as state chair, a source said.

Where Lesniak would fit into such a deal is unclear.

Asked about it, he reiterated his fixation: staying alive in elected office.

“All other considerations will be determined after the election,” the veteran senator said.

PolitickerNJ.com asked him if he would at least consider giving input on Buono’s candidate for lieutenant governor.

“He would make a great LG candidate,” Lesniak said of Holley.

The senator’s prodigy won’t rule it out – he even appears very willing.

At the moment, Team Buono continues to study the possibility of a running mate who is not in politics – a private-sector person freed from the alliances balkanizing the party.

PolitickerNJ.com asked a source close to the Buono campaign about criteria for such a person, and as the gubernatorial effort and battleground Democratic legislative candidates in the south appear far from each other and antagonistic in key instances, and the war between Cryan and Sweeney rages, “We must at least try to involve South Jersey,” the source said. 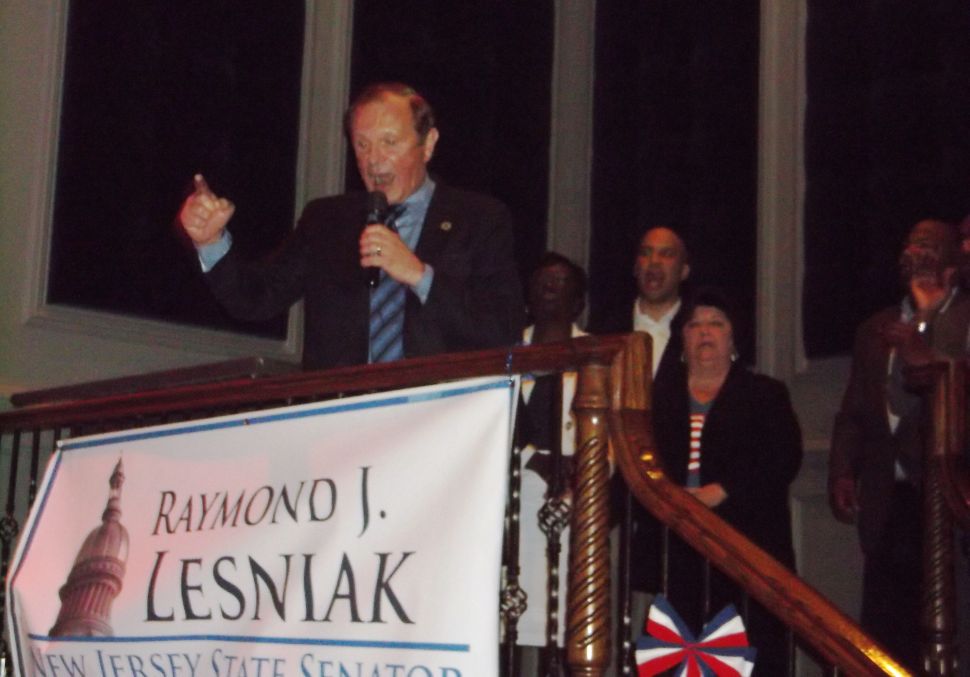