ELIZABETH – Once again, dockfront Legislative District 20 marks the scene of arguably the most compelling election of the season, as one of the state’s last surviving pit bosses of his generation, veteran Senator Ray Lesniak, faces a single mother from Roselle with little to no political experience.

On Wednesday afternoon, Donna Obe, president of the Roselle Board of Education, mounted the steps of a bus decked in red, white and blue across from the downtown realty office of Rafael Fajardo, Lesniak’s longtime political nemesis, and rival local overlord in charge of the Elizabeth Board of Education.

“The reality is that people are numb,” she said. “When I campaign, people all the time tell me, ‘why didn’t I get involved earlier?’ It is time for this to stop.”

Her smile radiated a political neophyte vibe, and PolitickerNJ.com asked her how voters could square that image with the relentless barrage of negative mail Fajardo’s forces have laid down on her behalf against the incumbent power broker.

“It’s not negative,” said Fajardo, appearing from around the corner of the bus.

“It’s the truth,” insisted the former president of the Elizabeth Board of Education. “He has made money on the backs of the people of this district. That’s what we’re putting out there. That hurts him? What about the pain he has caused people who have to decide between paying their taxes and paying for their medicine while he cuts deals with developers?”

PolitickerNJ.com got Lesniak on the telephone.

“My opponent is running a negative and slanderous campaign, while I have run a positive race based on my record,” the senator said.

“It’s obvious Fajardo’s running the campaign, and he’s making a mess of it,” he added.

The latest issue of “The County Post,” a newspaper from the workshop of the Fajardo inner sanctum that backs Obe mostly by bashing Lesniak, features a two-page itemization of all the senator’s corporate donors – $576,000 and counting – and the question, “Here it is in black and white how Senator Lesniak sold us out.”

Two Fajardo operatives made their way to headquarters with the latest round of glossy mailers from the opposition.

The first shows a picture of U.S. Sen. Bob Menendez (D-NJ) and a ringing endorsement. “From pathway to citizenship to the Dream Act, Raymond Lesniak has been the leading voice for us in Trenton,” Menendez says. “No one fights harder on these issues.”

The second piece features Elizabeth Mayor Chris Bollwage, who destroyed his challenger last year and whom Lesniak enlisted for his latest television ad.

Notably absent from the piece paid for by the Election Fund of Bollwage is Assemblyman Joe Cryan (D-20), who like his running mate Quijano, lacks a primary opponent, a political decision made by Fajardo and company in the waning hours before ELEC’s filing deadline. Lesniak’s allies say the piece is Elizabeth-focused only, which explains Cryan’s absence.

But regardless, Cryan is not ubiquitous the way he was last time.

The assemblyman drove a 3-1 plurality out of his hometown of Union Township two years ago to blunt the impact of then-Lesniak challenger Jerome Dunn defeating Lesniak in Elizabeth by 500 votes. By refusing to engage Cryan, and by refusing to engage the incumbent ticket’s lone Latina (Quijano) and focusing all their firepower on Lesniak, Obe’s allies hope to lull the game Irish American pol – chairman of the Union Township Democratic Party – to sleep and diminish Lesniak’s local Latino base.

Obe lives in Roselle, where Lesniak is counting on low name ID by the challenger and proven winner Roselle Mayor Jamel Holley getting out the vote to check former Mayor Garrett Smith looking for payback in the form of his alliance with Obe.

In Hillside, Fajardo has strong ties to incumbent Mayor Joe Menza, who’s up for re-election this year, but running as an independent in the November general election. Having announced her decision to retire as Union County Democratic Committee Chair, Lesniak ally Charlotte DeFilippo does not project strength at the moment from her local political perch.

Fajardo’s team trusts a sidelined Cryan will preside over less than invasion-like numbers in Union, which leaves Elizabeth.

“It comes down to Elizabeth,” said Fajardo, smoldering as he held in his hands a glossy mailer put out by Lesniak’s allies during the school board election earlier this year, which showed the backs of pigs at a long trough.

Inside, the mail piece noted the presence of Fajardo family members on the public dime.

“He hurts over what we’re throwing at him?” he wanted to know. “Tell me, is anything we put out as bad as this?”

While staying positive in his own campaign mail, Lesniak has harped throughout behind the scenes on Obe’s ties to the Elizabeth Board of Education.

The incumbent gave a savage beating to the Board of Education over then-Board President Marie Munn’s allegedly illegal participation of her children in the school lunch program.

Hurtful headlines hounded the Board of Education since last year, one of the reasons the inner sanctum selected the unknown Obe to run against Lesniak rather than Fajardo or sitting Board President Tony Monteiro.

“Explosive newspaper stories,” he said, confident that he has immobilized the rival local outfit, rejoicing last month as the state AG’s Office rounded up the Board of Education’s attorneys and another former board member, three more Fajardo allies.

The question at Fajardo HQ is whether those arrests scared others into no longer wanting to participate, or quietly motivated them to take revenge.

A man with dark shades appeared in Downtown Elizabeth.

He described himself as a Fajardo ally.

“”Fear,” he said. “We have to deal with the issue of fear out there among some of our people.”

Based on their performance last time, Fajardo said he believes they can turn out winning numbers for Obe, particularly since Lesniak hired two operatives who ran Oscar Ocasio’s doomed race last year to head up the senator’s 2013 field operation in Elizabeth.

The operatives and some members of Fajardo’s team did not leave on good terms.

“We have every confidence that they are working very well for us,” said Fajardo, referring to Lesniak’s team, and unable to resist cracking a smile. 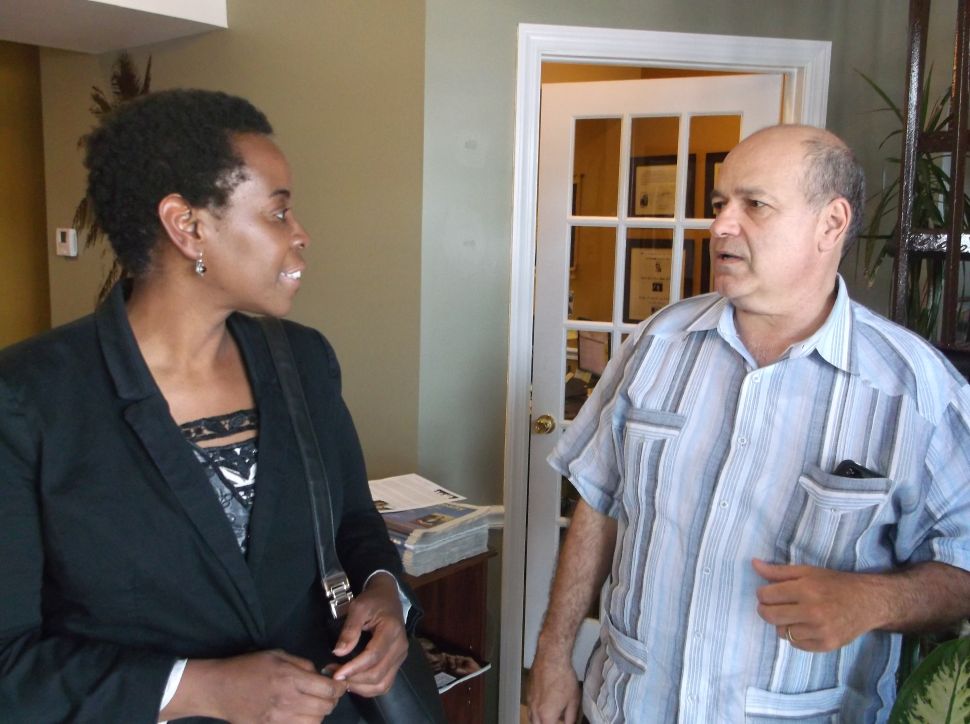