We met outside the Forbidden City, under the large portrait of Mao. I was en route to see the great leader’s embalmed body, which lies in a mausoleum across the street in Tiananmen Square. She was heading that way too.

“Travel alone?” she asked, after bumping into me by accident.

It was mid-April, a couple weeks ago. The sun shined brightly. Not the polluted Beijing air you read so much about. It was a good day to be a tourist.

She told me her name was Xin and that she hailed from Shaanxi, near Xi’an, home of the terracotta warriors. She’d flown into town that week for a wedding and had the day to herself.

I’ve always approached travel as an opportunity to not just see the sights, but to meet new people. In this case it was a woman who was going my way and offered to show me around. The Chinese are well known for their hospitality (I’ve been the recipient of much over the years), and it didn’t strike me as anything out of the ordinary.

She spoke English well, far better than most Chinese I’d met on my visits to the mainland, the result, she said, of practicing online with Westerners. “I like practice English,” she told me as we walked in a tunnel toward Tiananmen.

After emerging into the vast square, we approached Mao’s Mausoleum and saw a long line of tourists snaking between barriers. Xin and I both sighed. “Maybe,” she said. “We walk around hutongs instead.” I liked her thinking. Off we went to explore Beijing’s old alleyways.

As we walked through the winding streets, we talked about our families: my wife, her husband and three year-old boy.

We talked about the Tiananmen protests in 1989. “I was young, I see it on news and then one day no more,” she said. We talked about our shared love of international travel. Mine real, hers imagined. She wanted to visit New York. I told her I used to live there.

“You are lucky man,” she said. “You see so much. I never leave China.”

After half an hour I had to go. I was meeting my friend, Nina, for lunch.

I checked the time. “Very quick.”

She found a teahouse beneath a couple restaurants—dumpling and duck—on a bustling street.

In a private room she ordered two pots of tea. Pu-erh for her, jasmine for me. “My treat,” I said. She’d been so kind to me, the embodiment of Chinese hospitality. “I love meeting people when I travel,” I said.

We finished the tea quickly and the bill arrived. My jaw dropped.

Stunned, I typed 1,140 RMB on my phone, just to make sure my mental calculus was correct.

“This much?” I asked showing her the screen.

“$185?” I asked in disbelief. I’d never heard of something so outrageous, since tea for two people usually costs around $10 in Hong Kong. Unsure of what to do, I blurted, “Can we split it?”

In New York, con artists scam tourists with the broken glasses/bottle trick. While walking, someone brushes up against you and either drops a pair of glasses or a bag with an “expensive” bottle of wine in it. Then they wave a receipt and demand compensation for said broken item. A couple years ago in New York, a con artist named Naim Jabbar got sentenced to seven years for the broken glasses scam. But this wasn’t New York.

I didn’t realize I’d been had until I met Nina. At lunch she called a friend who lives in Beijing and explained the situation. “Call your bank,” she said about a half second into the call. “It’s a scam.”

After canceling my credit card, we headed back to the teahouse with seven Beijing cops in tow. Once inside I confronted the owner. He denied everything. The waitress, who I’d seen less than an hour earlier, looked at me blankly.

The lies continued until one of the cops sat the owner down. “Just give him his money back,” he said wearily. The owner reluctantly complied. He headed to the till and fetched 500 RMB.

“Give me the rest of my money,” I demanded.

He returned to the till and withdrew 70 more RMB.

As we left the teahouse it dawned on me that the cops never punished the teahouse owner or fined him. He was free to continue the scam that he ran in tandem with Xin.

The next day I went sightseeing again. Again, I found myself in Tiananmen. Earlier in the day three girls had asked me if I wanted to practice English with them. I ignored them. Sitting down in the square, I opened my map to find my next destination. Two more girls approached me, one with long hair, another with short hair. “Speak English?” Short Hair asked. “Want to drink tea?”

For the next ten minutes they did. They told me they get 20 percent of the cut, but business had been off recently. I asked if they ever feel bad about what they do. “Sometimes,” Long Hair said. “But foreigners have stolen from us for so long that we don’t care if we steal from them.”

Long Hair said she once had an American boss who promised to get her a visa to the U.S. and later fired her. “This is how I get back at him.” Short Hair blamed the Chinese government. “They’re rubbish!” she exclaimed, saying that only the people at the top have gotten wealthy while everyone else suffers. Mostly, however, they bemoaned the fact that people didn’t want to drink tea with them.

“Why do you think?” Long Hair asked me.

As a professional actor, I had lots of advice.  “Well, for one thing, your approach is too obvious. People know it’s a scam when you walk up and say, ‘Speak English? Drink tea?’ For it to work you have to earn people’s trust, befriend them.” Then I caught myself. Why was I improving a couple of con artists?

“Ah, yes,” Short Hair said. “Americans like you are very clever. But still you would never fall for that.”

“Of course not,” I said. “I used to live inNew York City. I’m far too clever to fall for that.” 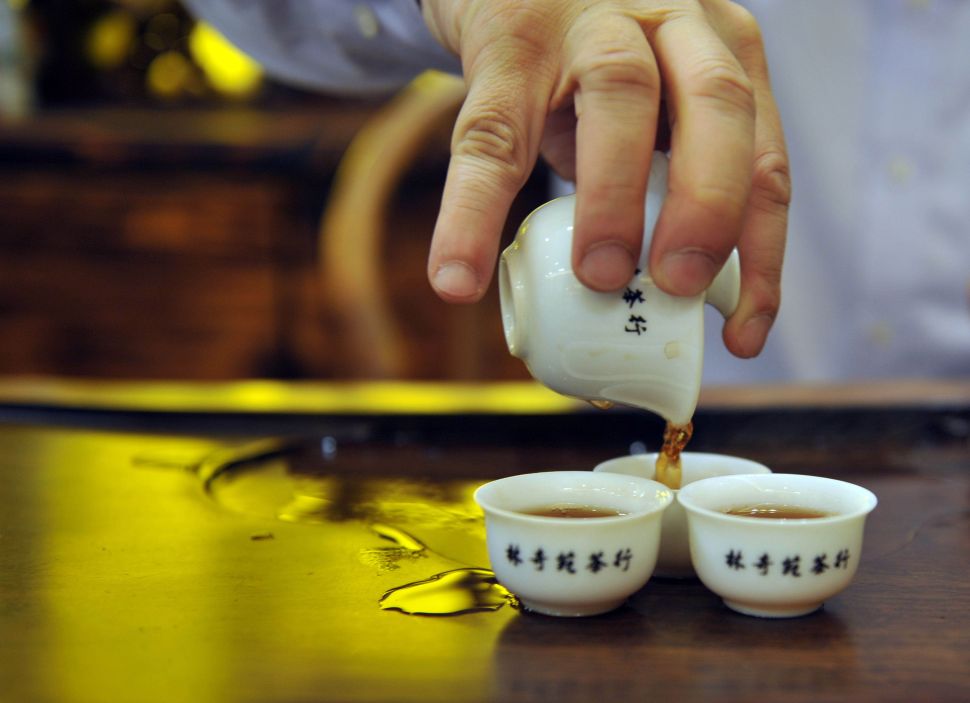 Filed Under: A New Yorker in China, Beijing