In a serious case of raining on hipsters’ parade, Williamsburg’s Painting Lounge was forced to suspend its BYOB art classes after the Daily News inquired with the NYPD about the legality of such “speakeasy”-style establishments, prompting an investigation.

The Painting Lounge’s owner, Kevin Tarasuk, is furious with the paper.

“The reporter was obviously looking for a story and decided to investigate the BYOB policy,” he said. “She used our business by name and forced everyone’s hand. She made up that ‘speakeasy’ bit. She created the story, in a way.”

At the Painting Lounge, hip Brooklynites shell out $50 to $65 dollars for a relaxing two to three-hour session reproducing masterworks like Van Gogh’s “Wheat Field with Cypresses,” Monet’s “Sunset in Venice’ or Warhol’s “Flowers” (supplies included).

The Daily News reported that “the raid came hours after the Daily News asked cops about the legality of drinking [in] several shops across Brooklyn and Manhattan that invite customers to bring their own booze to consume as they paint, get a pedicure, or make jewelry.”

Mr. Tarasuk emphasized that the police visit was not a “raid,” and told The Observer that he felt “sabotaged” by the Daily News’s investigation.

“Most of our customers have been supportive, saying it was very obnoxious, what the reporter did,” he added. “People are still signing up, very few people are cancelling. We’re working towards rectifying the situation regarding the BYOB and making sure that we’re complying with State Liquor Authority regulations.”

The shop announced on its website that they will continue to offer art classes without alcoholic accompaniment. They are offering refunds for clients who can’t create without a chilled glass of their preferred vintage on hand.

An editor at the Daily News responded to the comments in an email, saying that the journalist “was doing her job as a reporter, determining what the rules are so that her story about said rules would be accurate.”

Apparently a number of trendy Brooklyn businesses flout the BYOB policy, which states that any establishment allowing liquor consumption with a seating capacity of more than 20 must obtain a license, but enforcement is generally lax. The Painting Lounge got the short end of the stick by being called out for it. Mr. Tarasuk said that he was not aware that the Painting Lounge’s operations went against SLA regulations, and added that he was considering obtaining a liquor license, if necessary.

“The drinking part is something that gets people’s attention,” Mr. Tarasuk said, of the BYOB policy. “It’s a different way to have a night out with friends. But most of the time people leave with bottles three-quarters full because they get so involved in the classes. Take the alcohol out and the classes remain the same gratifying art experience.”

We at The Observer are torn. While we can’t condone illegal activity (even when it involves a crisp Chardonnay), it’s also not cool to have your sources arrested. Reporting 101. 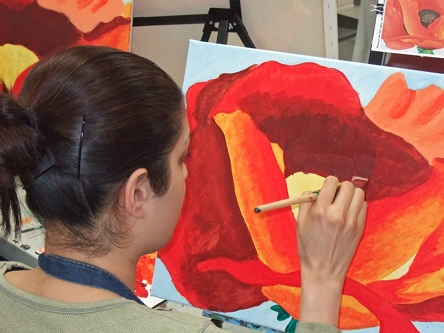