When David Paterson took office, he hired Christopher Ward to head the Port Authority. Where Mr. Shorris planned and consulted, Mr. Ward built. The Daily News, at the end of his tenure, called him a guy who “got things done,” but rapid progress came at a price.

Decisions under Mr. Paterson’s watch, said one former commissioner, “were really very heavily driven by the optics.” It was seven years after the attacks, and nothing on the site had even started to rise from the ground—an embarrassment to New York City. Mr. Paterson, who would not comment for this article, wanted tangible signs of success, said several sources close to the project, and he was less concerned than Mr. Spitzer about the financial hit to the Port Authority.

“Candidly,” said one former commissioner, Mr. Ward “was building it for you guys”—i.e., the press. New York’s media lambasted both the skyrocketing costs and cascading delays at the project, but it cheered Chris Ward for fast-tracking construction.

With the World Trade Center memorial sitting partly on top of the Transportation Hub, the logical order of construction was to finish the Hub first, and then worry about the at-grade memorial elements. Mr. Paterson’s command to Chris Ward to “get this fucking memorial open by 9/11”—the 10th anniversary of the attacks—meant the order of construction had to be reversed, with a deck built over the unfinished Hub to support the weight of the memorial.

Aside from his order to finish the memorial by the September 11, 2011, David Paterson was by most accounts not terribly concerned with how much it would all cost, or indeed with the World Trade Center site much at all. “We got lots of visits from Spitzer’s guys and Pataki’s guys,” said one former commissioner, “but I don’t believe we ever got any visit from Paterson’s.”

The hard costs of rushing the memorial were not significant in the context of a project measured in the billions of dollars—only $75 million, according to Port Authority documents—but the shift in focus from cutting costs to hurrying construction meant that Mr. Shorris’s value engineering of the below-grade elements, from which the majority of project costs would come, largely went out the window.

The Port Authority under David Paterson and Chris Ward did make some cuts to the design, including, notably, the now-infamous devolution of the light bird into a heavy stegosaurus. But the majority of Mr. Calatrava’s elaborate underground designs, throughout the web of passageways and retail space, were retained. The cost is now closing in on $4 billion, and Mr. Shorris’s more ambitious plan to keep it within its budget died a quiet death.

In the private sector, these things often turn out differently. Atlantic Yards in Brooklyn is one example. Despite Bruce Ratner’s “man crush” on Frank Gehry, in the words of one of his employees, and the nearly $100 million in fees that he paid for the design of the undulating apartment towers and stadium, Mr. Ratner didn’t hesitate to drop the starchitect from Atlantic Yards when the costs got too high—costs that were partly the result of Mr. Gehry’s insistence on designing the interior elements down to minute details like the stadium seats, something that should sound familiar to the Port Authority.

As an independent authority without access to the treasures of New York and New Jersey, the Port Authority is somewhat insulated from criticism and oversight. Its money comes from the cars that stream through its bridges and tunnels—the George Washington Bridge, with its $13 cash toll, is its biggest moneymaker, bringing in around half a billion a year. Its costs are hidden not only from the users of the World Trade Center buildings and Transportation Hub, but also from legislators in New York and New Jersey.

In its early years, the Port exerted its freedom from political pressure and acted independently of the governors. But decades later, it’s turned into something else entirely. Too juicy a target to remain autonomous, the Port Authority has devolved into a sort of slush fund for the governors of New York and New Jersey, its revenues out of reach of the states’ legislatures.

And then there’s the question of whether the Hub will have the intended uplifting effect on development in the Financial District. Office leasing is weak across the whole city, and there are huge vacancies in the towers that are going up (while half of them are not). Already chock full of architectural landmarks, the Financial District isn’t Valencia or Bilbao; it doesn’t need a monument to put it on the map.

Despite the staggering cost increases, some at the Port Authority—even those highly critical of the project’s cost—see it ultimately as a success. “At the end of the day,” said one former commissioner, “we didn’t fail—it got built.” (“It’s getting built” would be more accurate; the Hub is just now starting to rise above ground level and isn’t scheduled to open for at least another two years.)

These low expectations are a testament to the tremendous failings of the project—that the world’s most expensive train station, at nearly twice its initial budget despite design cutbacks, can be viewed in any light as a success.

Maybe, some years into the future (the Port Authority says two and a half), with tens of thousands of commuters from New Jersey pouring out from beneath the wings of Mr. Calatrava’s would-be concrete and glass bird, nobody will remember the cost.

But every time they can’t get a seat on a PATH train at 2 a.m., or get held up by delays in the 100-year-old North River Tunnels to Midtown, or emerge from a decrepit La Guardia Airport, they’ll have the Transportation Hub and other World Trade Center projects to thank. 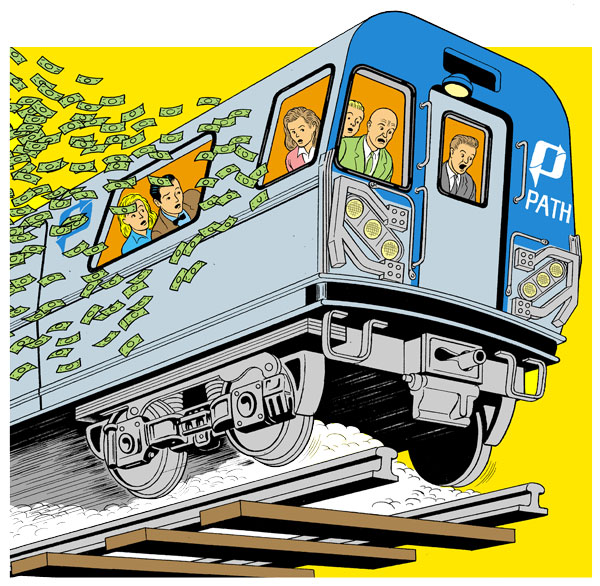