As the world went bonkers over the discovery that Patrick Stewart was eating his first “slice” of pizza in 72 years, New York magazine’s Daily Intelligencer got in touch with the star to get the scoop–er, slice–on the Tweet that brought a nation to its knees.

Turns out, it wasn’t that big of a deal.

“There was a school of thought that I had eaten my first pizza, but of course how could that possibly be true? I would have had to have stayed locked up in a cellar,” P-Stew told the magazine. “But nevertheless, this was my first slice of pizza, which I was only eating because my fiancée and I were a little hung-over yesterday morning … When it was brought over to me, my first comment was ‘There’s no knife and fork.’ Of course, I was mocked for thinking that I could eat a pizza slice with a knife and fork.”

He was then “instructed” to use the famous New York fold to avoid a greasy, tomato sauce-y mess. “It proved effective,” he added.

But Sir Stewart did kind of grow up in a cellar, as he only saw a pizza for the first time when he was in his twenties. “I know that will sound bizarre to you, but I grew up in a small community in northern England,” he said. 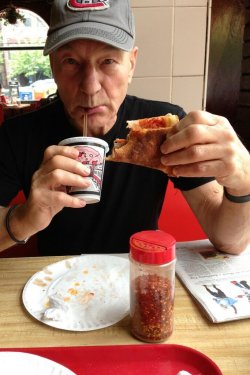