Governor Christie takes aim at a spider on his desk.

Oh, Chris Christie, ever a man of the people. First he saved New Jerseyans from the ravages of Superstorm Sandy, and last Friday, he saved innocent schoolchildren … from a spider.

A video posted to YouTube last week shows an heroic scene from a group of schoolchildren’s visit to the N.J. Governor’s office: After somebody spots a spider on Gov. Christie’s desk, the governor nudges the students aside and throws himself in harm’s way, fatally squashing the spider before it gets the chance to unleash its arachnid wrath on the children.

Then, Gov. Christie casually wipes the spider’s remains onto the jacket draped over the back of his chair and then onto his pants—keepin’ it classy.

“That’s also one of the fun parts about being governor,” Gov. Christie is heard saying in the video, “Any bugs on your desk, you’re allowed to kill them and not get in trouble.”

At least, that’s what he thought. Predictably, People for the Ethical Treatment of Animals (PETA) is upset over the spider’s demise, and has issued a statement on the event. “He probably did it without thinking,” said Ingrid Newkirk, PETA’s president, “Some people put the spider outside, but spiders are often scary to people, and that can prevent them from pondering their worth.”

Though we are certain the spider had plenty of worth to his or her spider community, we can’t help but side with the governor on this one. Though the world lost one spider last Friday, it also gained the laughter of twenty children.

Anyways, Gov. Chrsitie may not win the arachnophiles’ votes come November’s gubernatorial elections, but there’s no doubt N.J.’s fearless governor has won himself a roomful of pint-sized supporters. 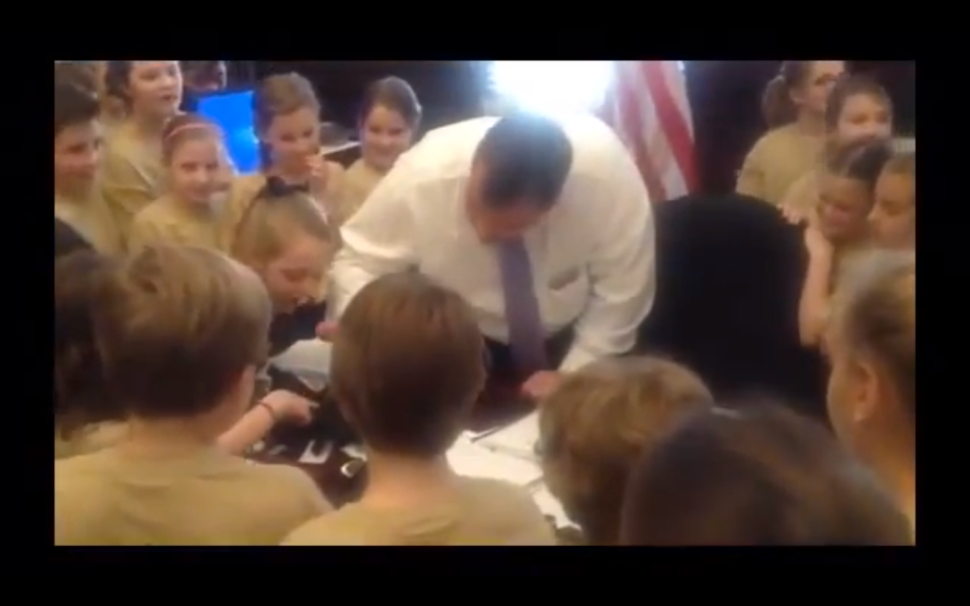