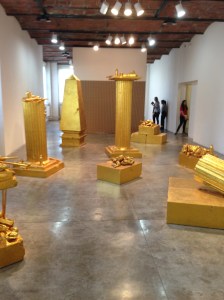 A room of John Miller statues. (The New York Observer)

This morning arts journalists and German camera crews mingled amidst chunks of icebergs and Jacob Kassay paintings for a press preview of “Expo 1,” the new museum-wide exhibition at MoMA PS1.

At a press conference in the Volkswagen Performance Dome, PS1 Director Klaus Biesenbach likened the show, which is actually comprised of several smaller exhibitions, to a world’s fair. He addressed the crowd accompanied by Hans Ulrich Obrist, who helped curate, referring to their back-and-forth quote furnishing as a “ping and pong” act (“Okay back to pong now!”).

“There’s a word in German, erweiterter kunstbegriff, that I think really fits for the show,” Mr. Biesenbach said, adding that though the Swiss Mr. Obrist speaks German the two tend to communicate in English.

“It’s difficult to translate into English,” Mr. Biesenbach added, and made no attempt to do so.

MoMA director Glenn Lowry praised VW’s “enlightened corporate support” and Hans Dieter Pötsch, of the VW board, said the museum would continue to receive it through 2015. The press conference itself oozed German efficiency: one woman in a white suit and a pink scarf stood near the podium, and it seemed that her job consisted of producing a completely filled glass of ice-less water from behind a partition whenever someone new took the stage. There was no pitcher in sight, yet she did this with every speaker, placing it next to his microphone.

Triple Canopy has also established a classroom on the upper level where the walls are pierced with metal beams, a reflection of their hope to extend its reach with a series of high-profile talks throughout the summer.

But the bulk of the museum is given over to “Dark Optimism,” curated by Mr. Biesenbach, which includes a Steve McQueen video of the Statue of Liberty, a massive crumbling pyramid by Adrián Villar Rojas opposite the classroom and a room filled with smaller silver Jacob Kassay paintings, for a total of what the press release called “approximately” 35 artists. Opposite Mr. Kassay’s room there is an impressive collection of high-energy Ansel Adams photographs (waterfalls, etc.) which comprise another show, “The Politics of Contemplation.”

Back on the ground floor, Olafur Eliasson has installed chunks of an Icelandic glacier in a refrigerated room for a piece called Your waste of time that, despite that hooplah, manages to be impressively minimalist.

Also not to be missed: “Probiotic,” organized by artist and curator Josh Kline, which focuses on emerging artists who all touched on the theme of technology’s influence on the human experience.

In that vein Mr. Biesenbach also invited us to the roof of PS1 to see a garden that had been installed there for its recently renovated cafeteria by M. Wells.

“This is too much sun for them here, you see?” a German reporter told a security guard up there, gesturing to a leaf of basil. “It’s wilted.”

“Yeah, I don’t have anything to do with that,” said the guard.