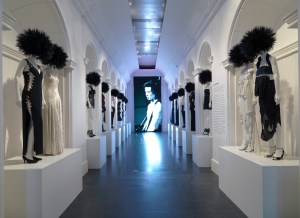 It’s too easy to make fun of the Met’s new “Punk: Chaos to Couture” show. There was the chipper press preview at 10 a.m. on a Monday morning bustling with well-groomed junior fashion editors in leather pants and Walter Steiger heels, the facsimile of CBGB’s bathroom circa 1975, complete with graffitied urinals and cigarette butts, and Anne Hathaway and Miley Cyrus playing platinum punk Barbies at the Costume Institute gala—mockable incongruities served up on a silver platter.

It’s not that the Met team was unaware of the disparity between the show’s subject and its venue or poorly versed on its material. Richard Hell and Johnny Rotten contributed catalog essays. Andrew Bolton, curator of the Institute, assembled its dramatic Alexander McQueen retrospective, and he argues clear-sightedly and with verve here that punk’s defining characteristic was “customization,” a precursor to contemporary Internet culture, in which consumption and creation are closely linked.

However, the work in the show only occasionally bears out this argument. It starts loudly, with the CBGB bathroom and bursts of music from the Ramones, and quickly moves to a recreation of Malcolm McLaren and Vivienne Westwood’s London boutique, Seditionaries, whose clothes smack of bondage gear, S&M, military uniforms and cozy red and black mohair sweaters. Ms. Westwood’s shirts, like Tits (1976-80), have their eponymous items printed on white cotton muslin. They are terrific, crude objects, undressing the wearer and violating the viewer simultaneously: as Dada as clothing can be. (Another shirt just reads: “Rape.”) The duo’s unconventional use of materials and repurposed shapes (parachute fabric, bondage trousers) would influence Japanese designers Junya Watanabe and Yohji Yamamoto and presage the DIY enterprises of succeeding British outsiders, like Tracey Emin and Sara Lucas’s Shop and Damien Hirst’s era-defining “Freeze” show. 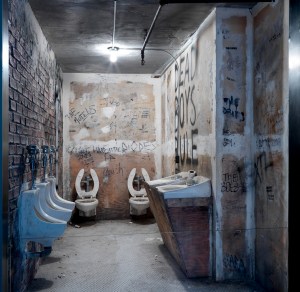 Punk looked great: black eyeliner, spiky and ragged crew cuts, ripped T-shirts, leather jackets, leotards with no pants for women, everything with spikes, chains and zippers. Its stripped-down style facilitated activities like pogo-dancing at Slits and Sex Pistols shows and spitting beer at or kicking the shit out of rival cliques like Teddy Boys or Mods.

But while the early pieces are vintage, the Doc Martens and Converse that the mannequins wear are incongruously clean and new. Stranger still are the couture pieces that punk “inspired.” Burberry’s jacket of black leather lambskin (2013) looks expensive and crafty, not anarchist (doubly so when Sienna Miller sported it at the gala). A Rodarte red and black mohair knit dress loses the meaning of McLaren/Westwood sweaters in translation.

Down a long hall come cuts inspired by punk, many of them riffs on the safety pin: Gianni Versace’s dress from spring/summer 1994 is all crêpe de chine with gold metal safety pins down one side, the garment that made Elizabeth Hurley famous. It’s an indicator of where the show is going: not to punk, but punk-inspired couture. The walls here are a nice touch: cavernous faux-brick or latex-sheeted like the interior of a nightclub, they are painted and repainted that flat black that hides evidence of vomit, cigarette smoke and daylight.

A section on graffiti is a dud. It proposes that bricolage, graffiti and agitprop lurk in punk’s slogan-ridden scrawl on clothes, then traces this premise to meaningless patterns on expensive frocks. Belgian designer Ann Demeulemeester’s paint-spattered silk dresses from 2006 are simply boring: treacly Pollocks repurposed for tea parties. Ms. Westwood’s 2006 belt and T-shirt bearing the text “I AM NOT A TERRORIST Please don’t arrest me” stand out as nearly the only highlight.

There just aren’t enough loans to wow viewers unmoved by the more intensely commercial side of fashion, though there are some bright spots, like a bunch of Comme des Garçons mannequins bundled in wool and silk satin ensembles held together by elastic bands. They are thoughtfully deconstructed, as are some Margiela adhesive-tape dresses and white plastic shopping bag bodysuits. 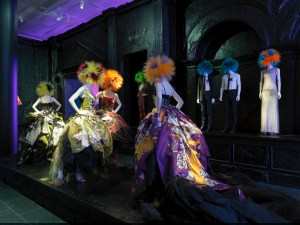 This exhibition is pitched to a fashion crowd, not a general audience—a fatal flaw. Guido Palau, of the grunge bouffant, couture ponytail and dry, big, medieval braids, has done the mannequin hair treatments here; he’s famous in fashion, but his wigs make the mannequins look more like troll dolls than punks. (For punk mannequins, see Stewart Uoo’s fantastically accessorized and torched sculptures of women, replete with maggot larvae, on display now at the Whitney.) We expect something a bit extra when we see clothing in a museum—something that takes it beyond commerce to achieve a level of illumination marked by awe, historical merit and creative ingenuity. Mr. Bolton’s McQueen had this in spades, but in “Punk” it is sadly lacking. He might be a curator whose strength is monographic exhibitions—individual names and brands, not thematics, rule the day here.