She may not have been the tallest member at last week’s Council meeting, but she was definitely the most enthusiastic.

Queens Councilman Mark Weprin was booted from his desk on Wednesday by a slightly younger replacement: Katiya Jones. The fifth grader at P.S. 26 in Fresh Meadows, Queens was the winner of Mr. Weprin’s “councilman for a day” contest, giving her the chance to experience life as a city official.

Dressed in a sharp black blazer and skirt, sparkly shoes, and a bright pink shirt with a matching hairband—and a Council pin courtesy of Councilman Robert Jackson—Katiya, who lives in Little Neck, played the part perfectly as her parents beamed. From early in the morning to late afternoon, she sat in on meetings, attended a press conference and even took over Mr. Weprin’s stately desk inside the Council Chambers–where his name plate was temporarily replaced by hers.

“It’s her first autism rally, but she’s committed to the cause,” Mr. Weprin joked.

The day was her prize for winning an essay contest that asked kids in the district what they loved most about Queens. She wrote about the New York Hall of Science, riding her bike in Cunningham Park and loving school–beating about 500 of her classmates, Mr. Weprin said. “Katiya’s obviously was written very well, but also took us on a little tour through cultural groups that she has been to throughout Queens, which makes her love Queens,” described Mr. Weprin. “She really made it seem like a great place to visit and live. It showed a lot of spirit and energy. And thank God she’s as spirited and energized as she appeared in the essay.”

Her day included a tour of City Hall. “It was so much fun! I got to see the conference room and the Governor’s room. It was so much fun!” she exclaimed on the matter. She also headed a roundtable meeting with a handful of Queen’s cultural groups at Mr. Weprin’s legislative office.

“It was,”—you guessed it—“so much fun!” she told Politicker, giggling. “They needed more money to fund for their programs for trips to schools.”

“She already signed off on it. So basically you can tell the mayor and the speaker that Katiya just solved the whole budget. So we’re basically done,” Mr. Weprin joked.

After the rally, Katiya attended the stated Council meeting, where she met City Council Speaker Christine Quinn and posed for photos.

Proud mom Karyl Jones, who got to tag along with her daughter, said the day was an honor.

Mr. Weprin said the program, which he and other Council members have been running for years, gives kids the chance to experience government first-hand.

“You know most kids don’t know much about government. This is a chance to bring her in, let her learn a lot, let her get up close with how government works,” he said. “Believe it or not, most people, when they actually see government in action first-hand, they actually appreciate the work that is done.” Her dad, Sylvester Jones, 47, said it was a learning experience for him, too.

“Just seeing city government in action, person to person …. that’s not something that I have been privy to,” he said. “So it’s a learning experience for me, as well.”

But despite all of her enthusiasm, Katiya said she has no interest in going into politics when she grows up.

She wants to be a pediatrician instead. 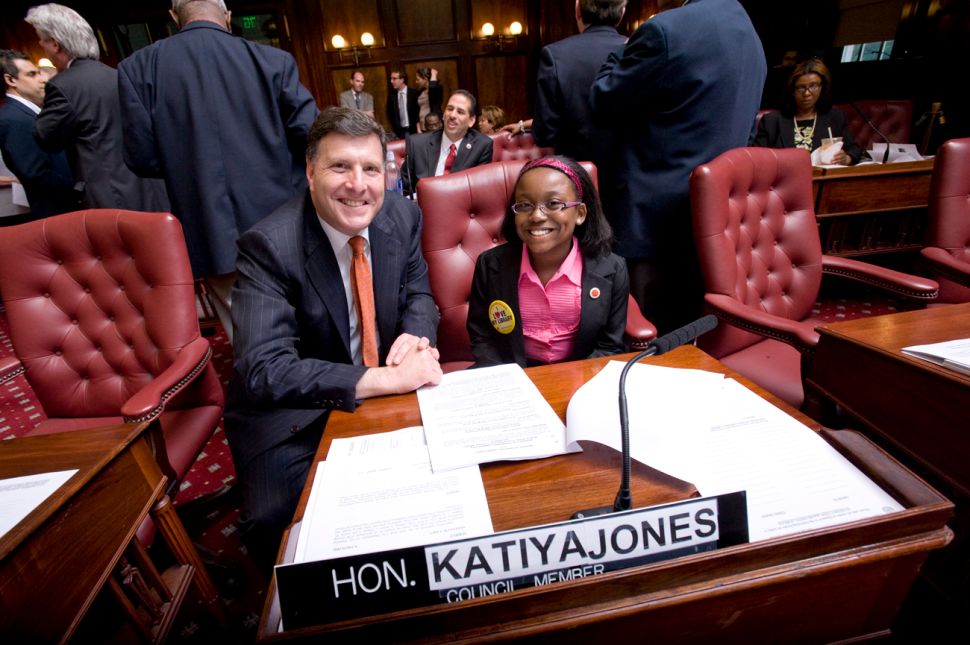