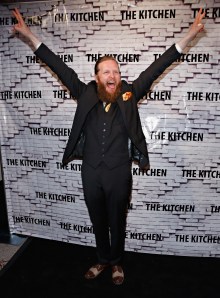 There are plenty of entertaining moments to pull from Carol Vogel’s profile of Venice Biennale curator Massimiliano Gioni, which hit The New York Times‘s website this afternoon, but we’re going to go with this tidbit about what Ragnar Kjartansson has planned for the biennial.

The group then looked at images online of the “S. S. Hangover,” the Icelandic artist Ragnar Kjartansson’s fishing boat that will have six horn players performing on the in the Arsenale for four hours every day for six months. “We’re working with a conservatory in Venice to find the players,” Mr. Gioni said.

That sounds annoying as hell, and terrific. Okay one more thing from the piece.

“Right now I wish there was another me,” Mr. Gioni said with a sigh.

Previously: “The Emperor Has No Clothes—And That’s O.K.!”