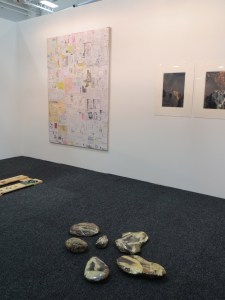 It’s rare to see an artist at his dealer’s booth at an art fair. Most don’t like to witness the mercantile–or, as one artist put it, “shopping mall”–side of the business. But at NADA, the booth of Jose Martos was practically swarming with artists.

Mr. Martos was giving a tour of his booth, pointing out works.

“This is a Justin Lieberman painting,” he said, “and this is Justin Lieberman.” The artist, bald and bearded with round spectacles, was standing in front of his work, clutching a newspaper. He chuckled jovially and offered his hand.

“This is the 12th or 13th one I’ve done in a series I call ‘Super Supplementals.’ It’s supplemental material from shows of mine going back, like, 15 years. This is the first installation drawing from my first show in Boston in 1994,” he said, pointing to a corner of the canvas, which was a mannered collage of notes and scribbles. “I’m really bad at keeping my own archive,” he continued. “This is my way of keeping my archive preserved.”

Asked if he liked seeing his work on display at an art fair, Mr. Lieberman said, “It’s not the best context for art to be shown.” He glanced over at another work, a dark black canvas hanging on another wall of the booth. “But this is by my friend Robert Janitz.” Robert Janitz appeared in the booth, as if materializing upon the mention of his name. (Not kidding.) He smiled meekly. “He does a lot of different kinds of painting, but at art fairs, he only shows black paintings. All these refusals and negations, they have to take place in public.”

“See, I’m a communist,” Mr. Lieberman said. He pulled out a red book from underneath his arm–The Communist Postscript by Boris Groys. (“It’s O.K.,” he said, adding that it deals with Stalin “intelligently.”)

He continued, “This sort of place here is not a place where you can affirm that. If you want to be a communist, you have to build up that infrastructure from scratch. There’s two kinds of negation in art, and you have to pick one. One is you infinitely try to keep up with your own market. The other is quit making art.”