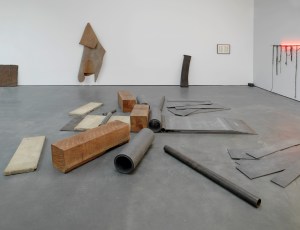 Take Richard Serra’s 1967 artwork Verb List, a piece consisting of 108 terms handwritten across four columns on two sheets of letter paper. It’s a kind of index to the 18 titanic formal experiments, borrowed from museums and private collections all over the world, that have been arranged to loosely recreate the feeling of the artist’s 1968 Soho loft inside David Zwirner’s distractingly opulent new building on West 20th Street. Begin with “to roll.” Scavenge an irregular, four-foot-high ingot of black rubber, scraped or torn into a sandy latex color along one corner. Lean it against the wall. The way it lists to the right brings to mind a dancer striking a supple pose, whose shape looks transitional even as it holds steady—a perfect sculptural embodiment of frozen gesture. But then the soft material reminds you that the piece, Chunk (1967) really is bending the way it looks like it’s bending, even though it’s bending too slowly to see.

Jump to Verb List’s second column and pick out “to support.” Set an eight-foot-long roll of sheet lead on the floor and lean it into a five-foot-square lead plate against the wall. Notice how the bottom edge of the roll flattens under its own weight: this one is called Prop (1968). But a monumental aesthetic—and even Chunk seems to create its own horizon simply in order to fill it—is no match for a subtle conception. Two hanging rubber wall pieces, one folded and tan like a hide, the other more geometric, continue the sense of delicate operations carried out by giant hands. And even Verb List is hardly as literal as it looks. After “to roll” comes “to crease” and “to fold,” and so on, in neat cursive, with a thick graphite line. But a full two dozen of these terms begin with “of” rather than “to”—as in “of entropy,” “of layering,” or “of electromagnetic”—and few of the verbs are as concrete as “to crease.” Given a roll of sheet lead, how do you “dapple,” “flood” or “complement” it? 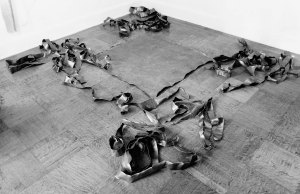 In the next room, this apparent mystery is stripped away to reveal the mystery underneath. One Ton Prop (House of Cards) (1969) consists of four inch-thick, four-foot-square lead plates, streaked and stained. Balanced on edge around a slightly larger square, they fall in against one another, propped corner to corner in a rough open cube. This arrangement, despite its enormous potential energy, is as contingent as a soap bubble: it’s only one of an infinite number of possible ways to arrange four lead plates, and if a plate slipped or fell, the object called One Ton Prop would instantly cease to exist. Triangles of light from the gaps at the bottom pierce through a spiral of quadrilateral shadows.

Strike: To Roberta and Rudy (1969-71) is an eight-foot-high wall of steel jammed into the gallery’s back corner. While One Ton Prop’s repetition makes its components into generic units, blasting away their color and detail, Strike elevates its pattern of orange rust into a universal particular that defies generalization; the choice of its arrangement seems not like the faint, hazardous breath of mortality but singular and necessary. In part, this is as simple as the difference between looking down and looking up, or between walking around and back and forth—the fact that you can’t see both sides of Strike at once gives it a presence that the smaller prop pieces can’t have. But it’s also the difference between diving down to find bottom and then, having found it, using the bottom to spring back up.