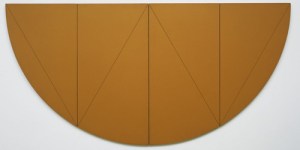 In a new video that PBS’s Art 21 program just released, Robert Mangold talks about working as a guard at the Museum of Modern Art in the early 1960s. It sounds like it was a pretty good gig. Here’s Mr. Mangold:

“It was a nice job. The museum opened at 11 and closed at 5, so it was like, uh, not bad. It was union wages and everybody liked it.”

That’s where he met one of his longest friends, Sol LeWitt, who was also working there at the time.

Quite a few soon-to-be-prominent artists and critics were employed by MoMA in that era, like Dan Flavin, Scott Burton, Lucy Lippard, Frank O’Hara and Robert Ryman. (Suzanne P. Hudson’s 2009 book Robert Ryman: Used Paint has some solid background on the artist’s time there.)

MoMA’s Inside/Out blog ran an article in 2010 about art types employed by the museum over the years. It’s worth a read. The full Mangold video follows below.