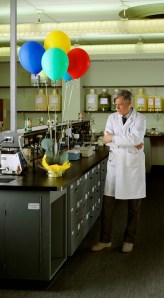 ‘Cactus Fan’ (2013) by Graham. (Courtesy the artist and Rodney Graham)

Old Punk on Pay Phone, a color transparency mounted on an aluminum lightbox, shows the artist Rodney Graham at almost life size. He’s standing on a sloping wet sidewalk in Vancouver, against a brick wall painted yellow and blue. His black leather jacket is covered in studs and crude lettering, his graying hair is greased up into a faux-hawk, and there’s eyeliner on his eyes. Holding the handset of a much-abused, wall-mounted pay phone to his ear, he looks off in shock—as if he’s just learned, say, that his father has died, and he is realizing for the first time that when it comes right down to it, he’d be glad to put on a necktie for his widowed mother’s sake.

Mr. Graham’s highly integrated idiom of reference, self-reference, self-consciousness, meticulous detail and self-deprecation creates the same effect of art-historical specificity whether his references are specific or not. Paddler, Mouth of the Seymour, which shows Mr. Graham paddling a wooden kayak, is a direct riff on Thomas Eakins’s The Champion Single Sculls, and Cactus Fan looks back to Carl Spitzweg’s 1850 Cactus Enthusiast, while the origins of Old Punk and The Drywaller are more diffuse. But they all feel equally like blunted jokes: they don’t have the trivial immediacy of a punch line, but there’s still enough narrative focus to constrain your view. 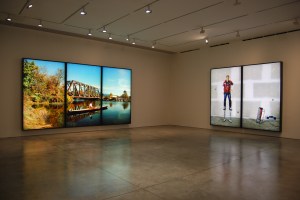 Cactus Fan is dominated by a small potted prickly pear and four brightly colored balloons. Mr. Graham, in a white lab coat, stares at the point where the balloons’ strings apparently meet the cactus’s round stems, oblivious to the fact that the taut strings, however eagerly upward their synthetically ideal-looking balloons may strain, are tied up much more deeply in the material—that is, around the plant’s base. But is that where Mr. Graham really stands? Probably not: as with a celebrity sighting in New York, the artist’s appearance in his own image wreaks a neat bit of reverse psychology, forcing you to look anywhere but at him. (Through June 15, 2013)