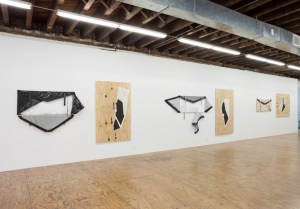 Last fall, Seth Price inaugurated Friedrich Petzel’s impressive new Chelsea space with a jam-packed show of luscious new vacuum-shaped plastic paintings, as well as huge fabric pieces resembling envelopes, fabricated by garment manufacturers. It was his fourth show with Petzel, and it confirmed Mr. Price, who is 40 this year, as one of today’s leading artists—a purveyor not only of sly conceptual gambits and ingenious theoretical writing but also appealing objects, a producer aiming for the fences.

His fourth show at Reena Spaulings is a comparatively modest affair. There are three new fabric envelopes, smaller though no less alluring than those shown at Petzel. They are coated with synthetic rubber, Kevlar mesh or Neoprene, and drip with fetishistic details—double-headed zippers, grommets, straps, buckles along their seams. Variously unzipped, unbuttoned and unbuckled, they open to reveal white charmeuse lining printed with repeating geometric patterns, the security symbols that typically coat business envelopes. These are paintings as securitized instruments, ready to be put into circulation. Handsomely described in a news release as pelts (which is to say, trophies), they’re also memorials to one vanishing medium of communication and exchange (the mailed letter) in the form of another (painting). And it’s all done through a fairly improbable splicing of Claes Oldenburg, Steven Parrino, Donald Moffett and bondage wear.

Alongside each envelope is a rectangular sheet of raw plywood, each with a print of a torn and scanned life-size envelope, its inside black. These don’t pack much of a punch, but they do seem to point toward the project of making a work with absolute restraint and attention to process in this overflowing digital age. Can there be a Robert Ryman—someone both in and apart from the crowd—in such an era? 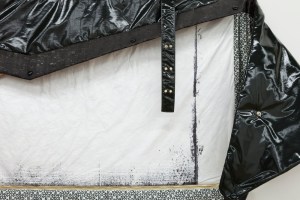 High on a wall near the entrance, a little plastic sign, like one you might find in a nondescript corporate office, spells out the name of the show, “Steh Pirce.” Are we in a counterfeit showroom—the art-world equivalent of a Folex-filled briefcase or a Canal Street bag boutique? Or was there an error in transmission, someone clicking “print” before the file had properly loaded? One of the gallery’s walls holds all six of the works, while another is left empty, as if awaiting fresh work. The office space has a small, inexplicable drawing of a woman letting out a maniacal laugh. It feels like we’re in the middle of something that is coming together, new data and ideas being assembled just outside our lines of sight. I can’t wait for round five. (Through June 9, 2013)