NEWARK – The Boys and Girls clubs hosted the professionally staged announcement for Shavar Jeffries’ Mayoral candidacy announcement. Over 400 supporters packed the gym, some of whom had already committed to the candidate, while others were still undecided.

“I grew up in a beautiful and courageous and brave place called Newark. I’m from a place where we took what we had and made what we needed,” said the mayoral candidate.

He served as counsel and assistant AG to the state Attorney General and occupied a seat on the Schools Advisory Commission. He teaches law at Seton Hall University.

Attendees of his announcement were a who’s-who of community leaders, political influencers and residents.

One undecided voter and neighbor of Jeffries, Clellie Higgins, spoke highly of him.  However, she said had not decided whom she was going to support because she wanted to hear what the other candidates had to say.

Barbara King, a former School Board member who served with Jeffries while on the school board, and was recognized during acknowledgements, also said she was there to listen, but had not made up her mind. Nevertheless, she credits Jeffries with helping her save her home, which was in the droves of foreclosure.

Yet, for every undecided voter there were a number of committed voters, all in attendance believing Jeffries is the one to take Newark to the next plateau.

A staunch supporter of Jeffries, Rockie Johnson, who hosts the local cable show Rocks Castle, a former supporter of Ras Baraka, said,  ” I don’t believe that any of the current council people or mayoral candidates can move Newark forward,” with the exception of Jeffries.

Another Jeffries supporter, former Assemblyman Bill Payne (D-29), said he is supporting Jeffries because “I believe he will take Newark into the future.”

The Jeffries invite list also included his Team Academy family, where Jeffries once served as Board Chair of the charter school.

Jermaine James, who is closely tied to Cory Booker and was his former Deputy Chief of Staff, later Co-Chief of Staff, was also in attendance to support Jeffries.  James said, “I support Shavar personally because he is someone that believes in the city and who wants to move Newark forward.” When asked about the rumored Cory Booker/Councilman Anibal Ramos connection, James dismissed the idea, saying he believes Booker will remain neutral.

Maryam Bey and Maisel Valentine spoke, both rumored to be West and North ward candidates, respectively on the Jeffries slate. Not in attendance, Wilfredo Caraballo is on the Jefferies ticket.

While some in the crowd declared his similarity to departing Mayor Cory Booker as a potential stumbling block for Jeffries, many others dismissed that posing a problem for Jeffries. Former Secretary of State of New Jersey for Gov. Corzine, Nina Mitchell Wells, said, “I wouldn’t dare compare him to Cory. Shavar is very much his own person.  He represents the best of Newark in every way.”

Regardless of those comparisons many praised Jeffries for being “his own man” and not having any ties to political bosses of deeply entrenched political families. Supporters believe the absence of strings make for a better candidate and more independent mayor.

Criticized for backing charter schools, Jeffries made no apologies for supporting schools reform. 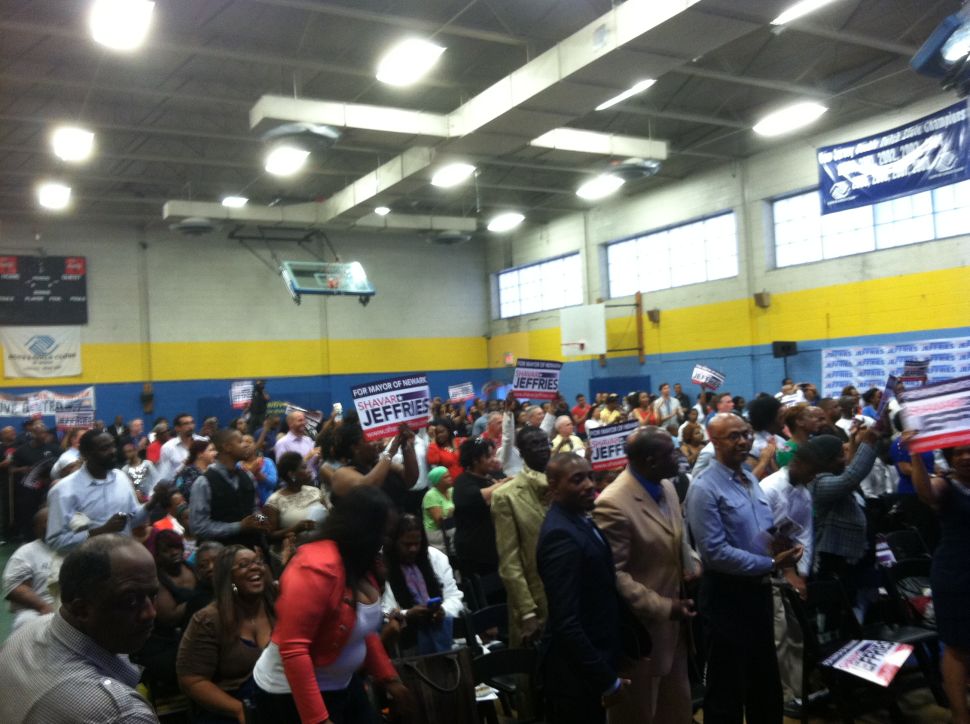