HOBOKEN – Barbara Buono went to the heart of Chris Christie country today to receive the endorsement of the New Jersey Sierra Club.

Actually, Hoboken Councilwoman Beth Mason was there, and Hudson County isn’t Christie country, actually, where registered Democrats swamp Republicans, 139,000 to 22,000, and where Jon Corzine beat Christie in 2009 76,000 to 29,000 votes.

But the Hudson County Democratic Organization (HCDO) is trying to revive itself after Steve Fulop flattened it in the Jersey City mayor’s race earlier this month, and the surviving portions are creaky at best, as Christie continues to maintain open and friendly relations with renegade Democrats state Sen. Brian P. Stack and Hoboken Mayor Dawn Zimmer while also landing the endorsement of Harrison Mayor Ray McDonough.

Then there’s Fulop himself, who unlike the defeated Jerry Healy, a staunch Buono backer, hasn’t endorsed a gubernatorial candidate.

Highlighting her policy – not political – record, Buono stood on the strand facing Manhattan with Sierra Club Director Jeff Tittel at her side.

“The Sierra Club endorsed Barbara Buono for governor because of her incredibly strong environmental record and for her having the strength and courage of her convictions to put her political career on the line,” said a lightly wind-blown Tittel. “Barbara Buono has shown leadership and a real commitment to protecting our environment. In this election, the contrast between the records of Senator Barbara Buono and the current governor couldn’t be clearer.”

Tittel and Buono both beat the leadership argument on the day after President Barack Obama strode along the boardwalk in a bipartisan effort to beef up the tourist trade ahead of the summer beach season.

Buono said the governor’s inability to identify climate change as a cause of storms like Sandy, and his decision to withdraw New Jersey from the Regional Greenhouse Gas Initiative (RGGI) put him outside the mainstream and constitute, in effect, a leadership gap.  “I’m happy the governor did his job,” the Democratic gubernatorial candidate said, referring to his response during the storm.

“I only wish he would show some leadership,” she added.

The crux of the problem, according to the candidate, is that the governor sees economic development at odds with environmental regulations.

Tittel acknowledged Christie “walking around the beaches” after Hurricane Sandy, but said the governor refuses to meaningfully support a reduction of greenhouse gas emissions, which the Sierra Club leader linked to weather pattern changes.

While noting Buono’s differentiation from the governor on environmental policy, PolitickerNJ.com asked the Democrat if she could assure voters that she would have adequate crisis management skills to compete with Christie in the event of another Hurricane Sandy.

Buono cited her chairmanship of the Senate Budget Committee in the midst of a “global meltdown.”

“It was the worst financial crisis in modern history and I had the skills to address that situation,” she said.

A Democratic Party source hovering at the edge of the event argued that state Sacco’s assumed control of the HCDO in the aftermath of the Jersey City mayor’s race is good for Buono because she has a solid relationship with Sacco.

After defeating Healy, Fulop had a choice between Hudson’s two local strongmen: Sacco, who is the poster boy for Christie condemnations statewide about the catastrophes of triple dipping; and Stack, who is likely to endorse Christie in the general election.

Fulop picked Sacco, whose Secaucus Assemblyman, Vincent Prieto, (D-32), will assume the reins of the HCDO from Bayonne Mayor Mark Smith when the organization resets next month.

Sacco will at least assure that the HCDO doesn’t become the next Christie plaything, the source told PolitickerNJ.com.

Asked why Fulop went with Sacco over STack, a source said, “Brian bites off people’s heads too much, while Nicky just seems (friendly). It was easier for Steve to cut a deal with Nick rather than wade into Brian’s volatility.”

But there’s another problem, according to a Democratic Party source, for while Sacco and Fulop appear willing to work together on re-conceiving the HCDO, and Buono, at least, has the political relationship with Sacco, Hudson County powerhouse U.S. Sen. Bob Menendez (D-NJ) is relatively subdued as he goes through his own process of trying to rehabilitate his image and stabilize his office after reports of the feds looking into his advocacy for Florida eye Dr. Salomon Melgen.

For her part, Buono focused on the endorsement at hand.

“I’m not concerned about the insiders and chatter in the backroom,” she said.

In specific response to Tittel’s endorsement, Christie spokesman Kevin Roberts said, “Jeff Tittel has spent the last four years as a rabid partisan, opposing nearly every reform and solution Governor Christie has pushed forward with to fix New Jersey’s economy, create jobs, and protect our environment for the future.  Naturally he would gravitate to Barbara Buono, the candidate who was part and parcel of the policies and decisions that wrecked New Jersey’s economy.” 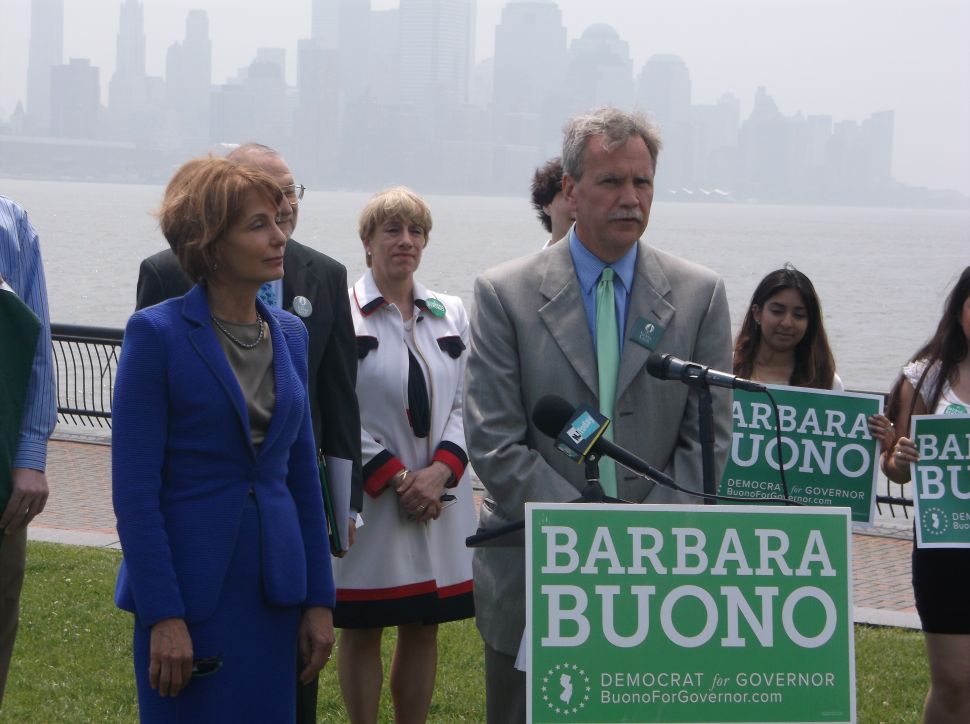