23 Beekman Place survived for 100 years before Paul Rudolph had his way with it.

Tucked away on the far east side, a few blocks north of the global headquarters of the powerful and geriatric (i.e., the United Nations) and across the East River from the southern tip of Roosevelt Island, Beekman Place is arguably New York’s most centrally out-of-way enclave.

A waterfront neighborhood once blighted by industry, Beekman Place’s fortunes were buoyed by a booming real estate market and a new-found respect for the water in the 1920s, and the micro-hood became one of the most exclusive in the city. “They sit in their co-ops,” the mayor in Tom Wolfe’s Bonfire of the Vanities said, “Park Avenue, Fifth, Beekman Place, snug like a bug. Twelve-foot ceilings, a wing for them, one for the help.”

The help might be gone (or at least, the staff apartments are), but Beekman remains a refuge of quietude and snob appeal within walking distance of the Plaza District.

And it’s not just the older co-op crowd that flocks to the street. The townhouse at 23 Beekman Place, re-designed by modernist giant Paul Rudolph, has managed to attract architectural aficionados to the old money redoubt—and renters, at that!

Renovated—mercifully—after Paul Rudolph got over his Brutalist kick, the townhouse’s most prominent feature is a mass of perpendicularly-arranged steel jutting out from its penthouse over the sidewalk. The rest of the front is largely as it was when constructed in the 1860s, though the back was given a thoroughly modern renovation, leaving four full-floor apartments with unobstructed East River views.

While it could eventually be assembled into a single-family home, the building is currently carved up into four rather luxurious units, topped by Mr. Rudolph’s old penthouse with the signature orthogonal (dare we say, under-construction-looking?) addition, which has just been rented out.

The townhouse was originally asking a whopping $27.5 million (it doesn’t sound so ridiculous compared to Ellen Biddle Shipman’s townhouse next door, which made its market debut at $48.5 million last fall), but the owners quickly dropped the price and now it’s trying for a more reasonable $22.5 million, slightly under $2,500 a foot for the 9,293-square foot property.

Howard Morrell at Brown Harris Stevens wouldn’t say what the aerie rented for, but the it was last asking $13,700 a month, down from $15,000 a few years ago.

The other three units, all of which contain full-length balconies out back, are also occupied. So while the owners—the deed is held by Ruppert LLC—may not be able to offload their recently-landmarked house anytime soon, at least they ought to be able to cover the upkeep on the starchitect residence. 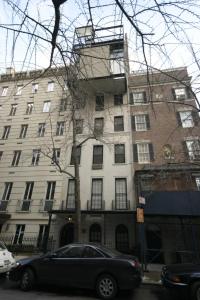