Though Manhattan real estate was spared the worst of the economic downturn and foreclosure crisis after the crash of 2008, the credit crunch has affected every would-be purchaser who wasn’t paying all cash in the past few years. Yes, mortgages were technically available, provided you were the perfect, blemish-free candidate with sky-high credit scores, eons of rising pay stubs and impressive, consistent tax returns year after year buying into a solid, well-managed building insured for every kind of natural—and seemingly supernatural—catastrophe.

But what kept everything humming along was those tempting interest rates—hovering at historic lows, then declining just a little more. Most sensible apartment owners at least figured out that refinancing was a good idea—some were late to the party—but that activity kept the mortgage bankers busy.

One banker that kept very busy this year was National Cooperative Bank, which lends to over 50 percent of the co-ops in the region. “More co-ops are looking to borrow for capital improvement projects and refinance existing debt saddled with higher interest rates,” says Ed Howe, managing director of NCB in New York. “Because of this, last year was record-setting (arranging $872 million worth of underlying loans in New York in 2012) as boards worked to insure the financial health of their properties in the future. This low-interest-rate environment means co-ops are taking a more aggressive amortization schedule, and paying down more of the principal now. With rates so low, they will eventually rise, and cooperatives are protecting themselves by lowering debt obligations in the future, by paying more now.”

As for individual purchasers, during the molasses-like recovery, there were those for whom purchasing apartments just wasn’t an option—the bar for getting a mortgage was just too high, and many were not feeling economically secure enough to even attempt it. Anything—less than perfect credit history, a recent income drop—would automatically disqualify you. And it probably still will. But bankers report they are seeing more activity than just refi stragglers. “We’re busy with pre-quals,” reports Alan Rosenbaum, president and CEO of Guardhill Financial, which focuses on condos and co-ops in the metropolitan area. “Some of our clients are getting outbid—that hasn’t happened for a while. Some are winning. It’s very exciting.”

Almost everyone agrees that the low-interest environment of the last five years has contributed to the recovery, and ensured that at least some transactions happened, even in the worst of times. “It makes a big difference to buy a $1 million home at 3% than to buy it at 6%,” Mr. Rosenbaum points out. About a $360,000 difference over the life of a 15-year loan, he quickly calculates in his head. And so buyers who could, bought, enjoying the fact that it was their market for a change. Not anymore.

With the recovery, however slow, the low interest rates many have come to rely on just cannot last forever—they have been held there artificially by the government’s purchase of mortgage-backed securities and bonds, Mr. Rosenbaum explains. Different bankers have different views on when rates will climb, but, as Mr. Rosenbaum says, “Rates have to go up. It’s just a matter of when.” Though some describe the recovery as weak, the fact is that unemployment figures are better, and the stock market never seems to have gotten the memo that the country was in a recession. Inflation is bound to come, the experts say. “The best-case scenario would be slowly rising interest rates,” Mr. Rosenbaum posits. “I think within six months, you’re going to see them rise.”

So, given that it might be a good time to apply for a mortgage, how hard is it to get one these days? For qualified borrowers, says Melissa Cohn, executive vice president of the Manhattan Division of Guaranteed Rate, the country’s eighth-largest lender, the process is similar to what it has been for the last five years. “Due diligence is increased,” Ms. Cohn says. “Not just on borrowers but on buildings. Banks want to see that the building has adequate reserves, and has been running profitably for a number of years.”

Her prediction on interest rates? A little more cautious than Mr. Rosenbaum’s. “We have an economy that is finding its footing, not growing. I think interest rates will hold tight through the end of the year. Beyond that, we’ll have to see. It would have been better if the growth was more organic, not due to government stimulus.”

The good news? For Manhattan purchasers, many of whom fall into the jumbo mortgage category—or loans of more than $625,000. which is the Freddie Mac and Fannie Mae limit—there has been some loosening up of credit score requirements. “Some lenders have dropped the required score to 680, some even to 620,” says Ms. Cohn.

Of course, as Mr. Rosenbaum points out, high-net-worth individuals have even more options as the banks may more readily approve them in the hope they can sell other services to this sought-after group. 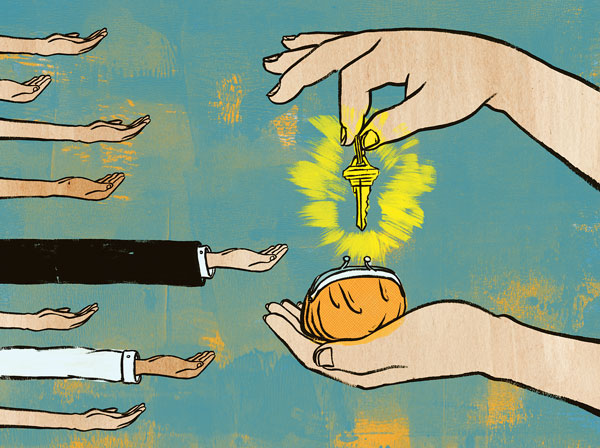