The war is over.

At least until after the Democratic Primary, which is three days from now.

Then the fighting between the state’s two most outsized rival political warlords is likely to re-ensue with a vengeance, but for the moment, state Sen. Nick Sacco (D-32) and Sen. Brian P. Stack (D-33) like each other.

Someone with apparently no shot running against Sacco without Stack’s imprimatur put Stack into protection mode on behalf of his fellow boss.

Challenging Sacco in the Democratic Primary, Francisco Torres of Gutenberg apparently invoked Stack’s name as an example of the right kind of North Hudson politics, but Stack didn’t appreciate the association.

Stack’s desire to stay away from Sacco’s challanger prompted him to affix his name to the following statement with Sacco:

“As many know, there has been a perception of political discord in North Hudson,” said Sacco and Stack. “While differences have existed, we both recognize the need to work together for our respective constituencies.  Furthermore, it is also recognized that certain political forces perpetuate the politics of division. Bearing this in mind, we wish to make public that we both support and endorse the candidacies of each other and that we strongly disapprove of other candidates using our names in campaign literature in order to give a false sense of endorsement regarding their candidacies.  Now is the time to put politics aside and continue to work for our respective constituencies.”

A Hudson source said the statement evolved out of Stack’s fear of being tarred with a loss in a competition with Sacco not of his making. 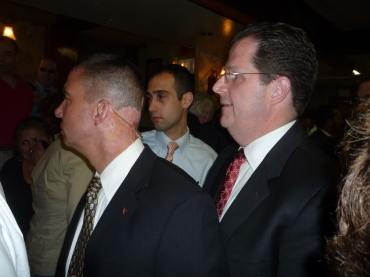