The fight broke out during the first act of Glengarry Glen Ross.

As Al Pacino and Bobby Cannavale circled each other on the boards, a well-dressed woman in the audience was noisily working her way through a cellophane package of Twizzlers. When a man in the next seat shushed her, the woman’s thuggish husband loudly intervened.

The exchange became more heated until the husband—who could have passed for a second-tier personal injury attorney from Planet of the Apes—challenged his adversary to “take it outside.” The pace may have been a little slow on stage, but those of us in the mezzanine were riveted by the imminent possibility of actual violence.

For far too many Broadway-goers, like Our Lady of the Twizzlers, enjoying a night at the theater has come to mean behaving like they’re relaxing at home, watching the big-screen from their sofa. Such a sense of entitlement, and the pushback it provokes from touchy fellow audience members, has resulted in an increasing number of aggressive confrontations, which have now joined more commonplace theater annoyances like texting or a ringing cell phone.

“It’s getting worse,” said theater publicist Billy Zavelson. “People seem to be unaware of the fact that even checking the time on your phone infuriates a dozen people around you, and it’s happening more and more.”

Portable technology seems to be the most obvious catalyst for many in-theater fights. Most people have been to a live performance during which a ringing cell phone has interrupted the show—some even have stories in which the offender chose to take the call.

Meanwhile, texting or using a mobile web browser has emerged as a form of annoying audience behavior to which some people feel especially entitled. The reasoning seems to be that because such activity does not involve audio, it should be allowed. But once a sensitive fellow theatergoer catches sight of the glowing screen, it can be easy to fixate on the irritation, like a dripping faucet in the still of the night.

National Review columnist Kevin Williamson became an Internet hero last week after writing about his experience seeing Natasha, Pierre, and the Great Comet of 1812 at Kazino on West 13th Street. After exchanging words with a woman whom he believed was using her phone to Google things during the performance, he snatched it from her hand and threw it across the room, where it hit a curtain. So she slapped him and summoned the event space’s security director.

Mr. Williamson wrote that the theater official attempted to make him stay on the premises, as the woman was considering pressing charges. He declined and went home to pen an angry column.

“In a civilized world, I would have received a commendation of some sort,” he wrote. “To the theater-going public of New York—nay, the the world—I say: ‘You’re welcome.’”

In Mr. Zavelson’s opinion, it’s not just the technology audience members have in the palms of their hands that’s to blame. He suspects that on-demand and streaming media services have accustomed people to viewing “shows” in the casual atmosphere of their own homes, and now they are bringing those manners with them into the public space. When their behavior elicits a strong response from other typically overwound New Yorkers, even minor issues can quickly escalate.

“There are the ‘shushes’ that are louder than any cell phone ringing,” he said. “I used to be the one who was, ‘Will you please shut up!’ Then you get so embarrassed because you realize you have acted disproportionately to the original issue. You become that Upper West Side, Lincoln Plaza movie person, where there are only three people in the theater and they’re yelling, ‘Shut up, shut up’ to the person behind them who’s eating fried chicken.” 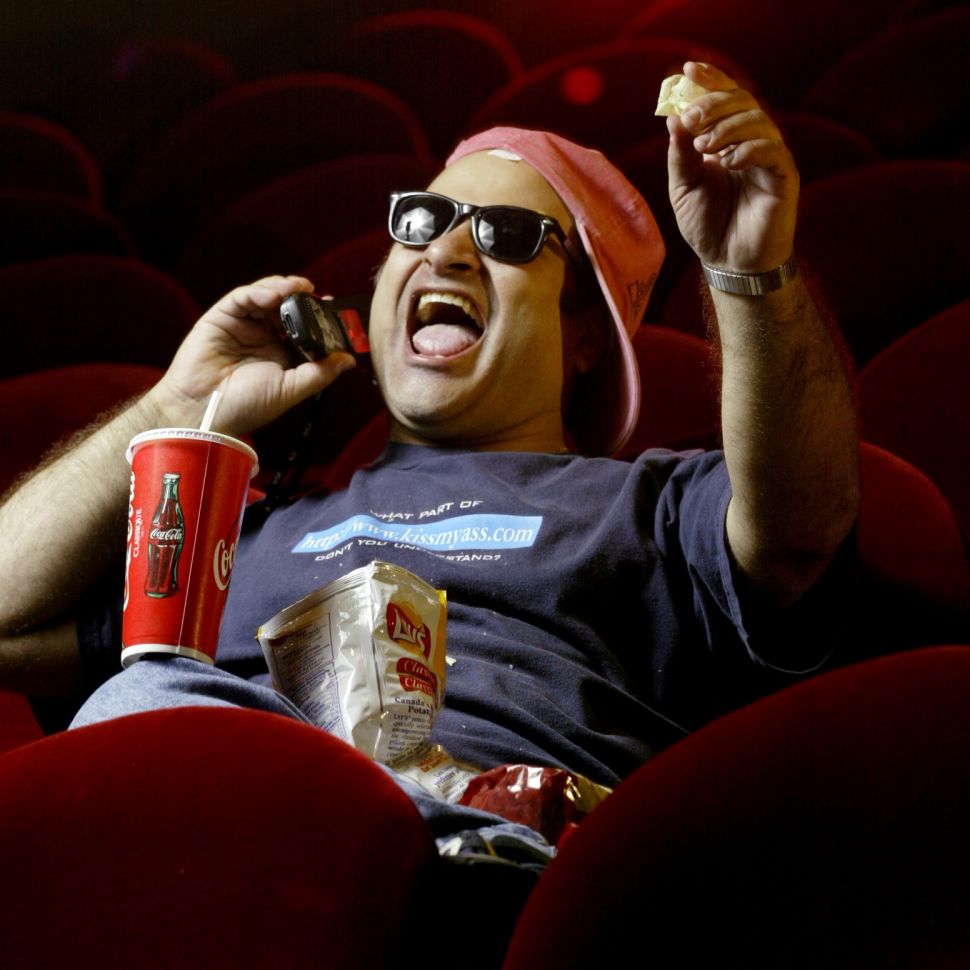