The state’s highest elected Democrat had harsh words last night for the presumptive party gubernatorial nominee, her top lieutenant and the new chairman of the state party.

Senate President Steve Sweeney lashed out at Democratic gubernatorial candidate Barbara Buono for her choice of Assemblyman Jason O’Donnell to head the state party.  Sweeney said O’Donnell will simply be a puppet for former state party Chairman Joe Cryan, who is a top advisor to Buono and an O’Donnell ally.  Both men were involved late last year in a failed attempt to overthrow the Assembly speaker.

“The frustration is she might as well have named Joe Cryan her choice for state party chair because Jason O’Donnell is simply a beard for Joe Cryan,” Sweeney said.

Buono named O’Donnell to the post Friday at the annual Democratic conference in Atlantic City.  Sweeney had been vocally opposed to O’Donnell, warning Buono at a fundraiser last week that choosing the Hudson County assemblyman could further fracture the party.

Buono has been struggling to gain traction in her gubernatorial bid and has been fighting apathy and even outright hostility from her own party.  That hostility again bubbled over as Sweeney bashed Buono’s leadership.

“Joe Cryan was the chair when we lost (former Gov.) Jon Corzine’s race for governor and Jason O’Donnell was the top lieutenant running Mayor Healy’s race in Jersey City last Tuesday,” Sweeney said.  “If that wasn’t bad enough, this choice continues to divide the party when we look to our gubernatorial candidate to unify us in such an important election year.”

Cryan, O’Donnell and a spokesman for Buono all declined comment when reached last night.

O’Donnell must still be approved by the state committee and chatter has been making the rounds that he could be opposed when the committee votes next month.  It’s unknown if Buono and O’Donnell have the votes, but losing her choice for chairman would be a major blow to her campaign.

Several county chairmen have already expressed support for Buono to choose her own candidate, however at least half the chairmen have not yet weighed in. 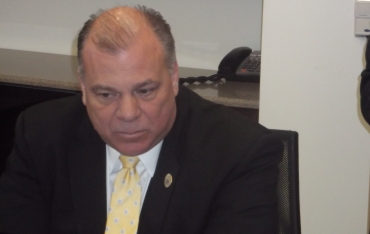