Buono and her surrogates have told Democrats they are close to naming Hudson County Assemblyman Jason O’Donnell to replace outgoing chairman John Wisniewski.

But the pick has received pushback from some Democrats owing to O’Donnell’s participation in a failed overthrow of Assembly Speaker Sheila Oliver late last year.

“He told her that while the pick would benefit people close to her, it would not benefit her or the party,” the source said.

Buono’s camp would not confirm the meeting or comment on her choice for state party chairman.  But the source said Buono told Sweeney that O’Donnell provides exactly what the party needs – new energy.

Buono has faced pushback in some circles since PolitickerNJ first reported that O’Donnell was her top choice for the spot.  Some Democrats initially called the pick a “non-starter” and said Buono risked party leaders “walking away” from her campaign if she went through with the O’Donnell appointment.

Buono responded defiantly, saying in an interview that she would not be dictated to and the choice would be hers.  Sources say she is comfortable with O’Donnell in the role and believes he provides more energy than any other potential candidate.

Other party leaders, including several Democratic county chairmen, issued a release saying as the presumptive gubernatorial nominee, Buono should have her choice of chairman, as is tradition in a gubernatorial election year.

Last week, Assemblywoman Bonnie Watson Coleman, who is serving as the chairwoman of the Buono campaign, approached party leaders to float O’Donnell as the choice, but Coleman continued to receive pushback, this time from Oliver, who said openly that she wasn’t sure she could trust O’Donnell.

Sources said she had requested that O’Donnell meet with her to hash out any remaining issues, but to date that meeting has not occurred.

Others in the party are wary of O’Donnell because of his closeness to Hudson County Democratic Chairman Mark Smith and his participation in the re-election campaign of Jersey City Mayor Jerry Healy. Healy is coming off a 14-point loss in the race.  U.S. Sen. Bob Menendez is reportedly in that camp, according to two sources.

One Democrat had a different take, theorizing that the concern emanating from Sweeney and others had more to do with control of the money raised by the state committee than party unity.

“That’s what it seems like to me,” the Democrat said.  “They may be worried that O’Donnell or whoever Barbara picks will control all the money raised by the state committee and they don’t want that.”

Buono is set to speak tomorrow at the annual Democratic conference in Atlantic City.  It’s unknown if she will name the new chairman prior to the conference. 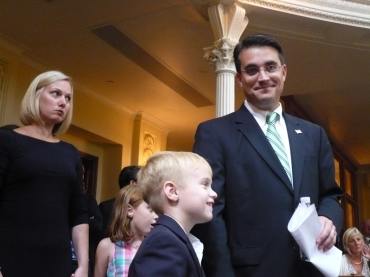