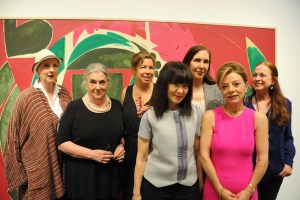 Even for the staunchest supporters of the cause, discussing gender inequity in the art world can get very grim very fast. Bleak statistics on gallery representation and auction records elicit (understandable) groans, and more time gets spent maligning the problems than working on them. Fortunately, the six women participating in last week’s “62 Years Later: Gender Politics in the Arts” discussion at Robert Miller Gallery avoided gloom, expressing optimism and frustration in near equal measure. In conjunction with the gallery’s Lee Krasner exhibition, three of the fiercest female forces in New York’s art world—RoseLee Goldberg, founding director and curator of Performa, artist Laurie Simmons and Anne Pasternak, president and artistic director of Creative Time—spoke about ambition and achievement along with Lauren Flanigan, an opera soprano and nonprofit director, Heather Watts, formerly the principal dancer in George Balanchine’s New York City Ballet, and moderator Sylvia Ann Hewlett, the esteemed author and economist.

“The playing field is improving for sure,” Ms. Pasternak told the roughly 80 people squeezed onto white wooden benches, citing the high number of female museum curators today. “I think it signals that we’ll see more women ascending to director positions.” More than a few comments about women’s progress were met with applause from the audience, which was mostly composed of women, but ran the gambit from young to old. The intensity of the exchange was only augmented by the broken air conditioning, which leant the room a kind of revolutionary heat.

Of course, a conversation about gender politics in any field is not complete these days without addressing (or knocking) Lean In, Sheryl Sandberg’s ubiquitous book on the subject.

“At the heart of that book is something that in some ways is profoundly anti-feminist,” said Ms. Hewlett, who in a hot pink dress looked like she had popped out of the vital Krasner canvas hanging behind her. As she explained it, Ms. Sandberg essentially argues that patriarchy and institutional prejudice are not what prevent women from advancing professionally, but women’s approaches and attitudes.

The panelists all gave examples of obstacles facing women in the arts. Opera singers encounter the occasional fitness suggestion (the producers of one performance told Ms. Flanigan “they would be happy to pay for a gym membership”); dancers are ousted at a certain age (“it’s a very forced upon you event,” said Ms. Watts, who retired from the stage in 1995); the directors of the country’s premier museums are virtually all male.

“Women who are in their mid-40s who lose jobs at organizations like mine have a very difficult time finding new ones, whereas men who do really bad things, like lose their endowments, get promoted to better positions,” said Ms. Pasternak, purple glasses dangling around her neck.

For the most part, the panelists maintained a sense of humor even while maligning the unfavorable odds facing female artists. “To decide to be an artist and be a woman, what a crapshoot, what an insane thing,” said Ms. Simmons, half-laughing at the prospect. “That’s like recommending your daughter be an actress or an opera singer, the chances of success in any of these worlds are so small. I would love to have a daughter who’s a doctor.” The crowd laughed given the circumstances, and Ms. Simmons did go on to praise her daughter “who works in television” for pioneering in a predominantly male field. Young people, for whom the panelists seemed to have high hopes, were a recurring subject. “A reason for me to start Performa was the next generation,” said Ms. Goldberg.

Obstacles may be inevitable, but Ms. Simmons indicated that hitting them can deepen one’s resolve. “I think rage plays a huge role in ambition,” said Ms. Simmons after the panel. “I feel like I try to be gracious and dignified and charming and then, when I meet with resistance I still am, but in my brain I’m saying, ‘Go fuck yourself. I’ll show you.’ You have to. You have to.”

“She talks about that in Lean In,” chimed in Fabienne Stephan, a pixieish director and curator at Salon 94, where Ms. Simmons shows.

“Yes! I might be the only one who did,” exclaimed Ms. Stephan.

Although Ms. Goldberg couldn’t be persuaded to journey uptown for a dinner at Betsy Miller’s East End apartment (she was fighting off the cold that seems to have hit half the city), her eyes flashed at the prospect of further pursuing the conversation, which felt short at just an hour. “I want to do more,” she said. “I want to keep going.”