On Tuesday, Jack Pawlowski went to Astoria’s Ditmars Park to do some target shooting. Accompanied by his five-year-old daughter and three-year-old son. In a children’s playground.

After firing off a few rounds, Mr. Pawlowski passed the plastic gun–which resembled a .38-caliber pistol–to his daughter, who rode around on her bicycle and aimed it at a pair of two-year-olds, according to witnesses.

The website QueensMamas reports that the playground is usually full of “toddlers riding scooters, digging in the dirt, playing ball or blowing bubbles.”

On this morning however, “all that changed, when several 2-year olds had a plastic 38-caliber loaded pellet gun pointed at them. They became the target of a gun wielding 4-year old, whose father sat looking on, smiling while his daughter terrorized the children; in fact, it was the father who loaded the gun and fired shots at the tree before handing it over to his daughter.”

Mr. Pawlowski, for his part, thinks people are totally overreacting. Speaking with the Daily News he dismissed the story as “concerned parents” making a fuss over nothing.

“They’re a little paranoid,” Mr. Pawlowski told the Daily News. “There’s a lot going on in the world—killing kids, stuff like that.”

Did you ever think that they might be “paranoid” because you gave your five-year-old daughter a weapon in a children’s playground? In the country where school shootings are as plentiful as Big Macs and where young children regularly murder one another with guns marketed to kids? Just speculating here.

“I didn’t even think about scaring somebody,” he went on. “We were just shooting at the fence. We were not aiming at the playground. We were in a corner behind it.”

But other parents were less than nonchalant about the whole affair. “I thought I was hallucinating. I literally did not know what to do,” one mother told the News. “That man is nuts. He’s dangerous.”

By the time the police showed up an hour later, the father was gone. Probably to go smoke doobies and drag race with a bunch of toddlers or something. 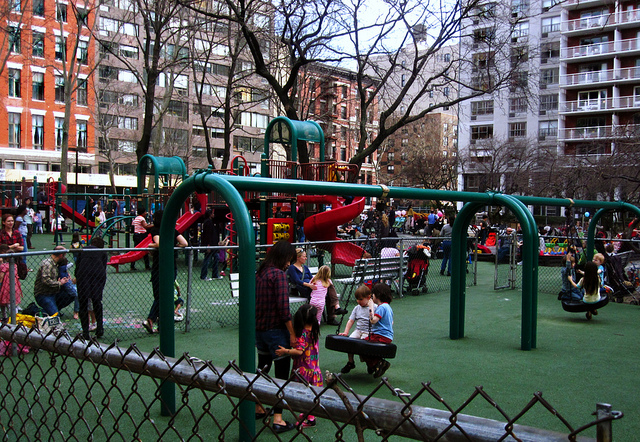