Ex-Congressman Anthony Weiner emerged from hiding, making his first appearance on the campaign trail Thursday morning in Harlem with a press spectacle that—at one point—attracted the attention of police officers who asked him to move away from the subway station where he’d been trying to greet voters because of the huge crowd of reporters.

Mr. Weiner arrived just before 7:45 a.m. for the frenzied meet-and-greet outside the station at the corner of 125th Street and Malcolm X in Harlem more than 24-hours after announcing that he was jumping into the crowded mayor’s race with a video posted on a re-vamped campaign website.

Almost immediately, the press swarmed the station entrance, blocking commuters from entering the train—and talking to Mr. Weiner–who repeatedly pleaded with the cameramen to move back.

“Step away from the candidate!” one of his handlers shouted. “Guys, you got to give him some room!”

Mr. Weiner shook numerous hands, posed for photo-ops with school kids and residents, and spoke with voters about his view on stop-and-frisk, immigration, homelessness and the role of charter schools.

“I could use your help,” he told them, asking numerous school kids to relay to their parents that he seemed like a “nice guy.” But much of his energy was spent apologizing for the frenzy.

“I’m sorry for the hoopla,” he repeatedly said. “I apologize, my friend. Here, walk this way. I’ll block for you. I might not look like much, but I can take care of myself,” he told one frustrated commuter.

The situation got so bad that, at one point, two police officers were forced to intervene, escorting Mr. Weiner and reporters away from the entrance. “I’m not blocking it, they are!” said Mr. Weiner, pointing to the press.

Still, despite the lewd photographs and lies that forced him to resign from Congress less than two years ago, the response from voters was largely positive.

“You are the only one who’s able to work with Congress and do something for the city,” said Abdoulaye Fious, 58, who was among those able to make it through the crowd. “He’s much better than anybody else running,” Mr. Fious told Politicker. “He’s part of the city.”

“I’m with you!” shouted another supporter, Sam Morell, 70, who said that he came out to try to meet Mr. Weiner after hearing about the appearance on television, and had hoped to volunteer for the campaign. However, after “seeing this crazy madness, with all the photographers, I have to think about it.”

“To tell you the truth, he has a big mouth and he doesn’t take any shit from anybody. I mean, he says what he means. He’s a politician, but he’s not a politician,” Mr. Morell explained, dismissing the scandal. “We all make mistakes. It doesn’t matter. I mean, he wasn’t caught with his finger in the pot. He sent out a few photographs a couple of years ago. If Clinton can get away with it.” Linda Smalls, another voter, said that she was “unenthused” by the whole field of candidates, but that Mr. Weiner would have her vote. “I like the work that he’s done in the past. Even though he made a mistake We’re human. He’s human. He apologized for it. I think it’s time to move on,” she said.  She was also apparently a fan of his lewd messages.

“Instead of a hug, I really wanted a text!” she exclaimed.

In fact, Mr. Weiner encountered just one angry voter who identified himself only as “Done—as in complete finish.”

“Mr. Weiner, is this just for publicity?!” he demanded, before asking the ex-councilman a much tamer question about what he’d do to stop technology taking over the workforce. “Go ahead Mr. Weineeeer!” he shouted once Mr. Mr. Weiner was done.

Speaking to reporters afterwards, most of the questions focused on how, less than two years after the infamous tweeting scandal, he really thought that he could win.

“Ultimately this is going to be up to the voters to decide,” he said. “I think what I learned today here at the subway stop is that people are going to make their determination based on the interests that they think are important. If citizens want to talk to me about my personal failings, that’s their right. And I’m going to do everything I can to answer them.”

But, he said, “I have to tell you, I was at the subway here for a while and people basically wanted to talk about issues and the challenges that we have.”

Once the press conference had ended, Mr. Weiner headed down to the train—and the press followed, crowding into a packed train heading downtown. Inside, Mr. Weiner kibitzed with passengers, including Lori Coad, who said she was homeless and had been living with friends.

“Go to the shelters!” she urged Mr. Weiner. “Don’t go on the train. Go to the nursing homes, see what they’re feeding them,” she said. “You’re trying to get back into office. What are you going to do?” she asked.

After their conversation, Ms. Coad said didn’t care about the scandal and would consider him.

“I would vote for him if he means what he says. What you do on your private time is your private business,” she explained, urging Mr. Weiner to “stop going online and texting stuff!”

“Stay off of Facebook and all of that. Leave that alone!” she called out to him.

“You know, we were doing so well there for a minute,” he said. “I almost got off this train with everything going fine.” She said he didn’t have to worry.

“What you do on your personal time is your personal business,” Ms. Coad told him, “I’ll still vote for you! I ain’t worried ’bout your personal life. I’m worried about what you tryin’ to do for the people.”

“We make mistakes,” another woman chimed in.

Mr. Weiner emerged at 14th Street, and was again trailed by reporters for blocks as he walked through Greenwich Village. He was peppered him with questions about the economy, his loss in 2005, and dodged questions about his strategy and opponents.

Finally, Mr. Weiner bid farewell outside the studios of WNYC, where he was scheduled to do an interview with Brian Lehrer.

“This is my stop. So we’re going to have to say, ’til we meet again,’” he said, before ducking into the building more than an hour before his interview was actually scheduled to start. 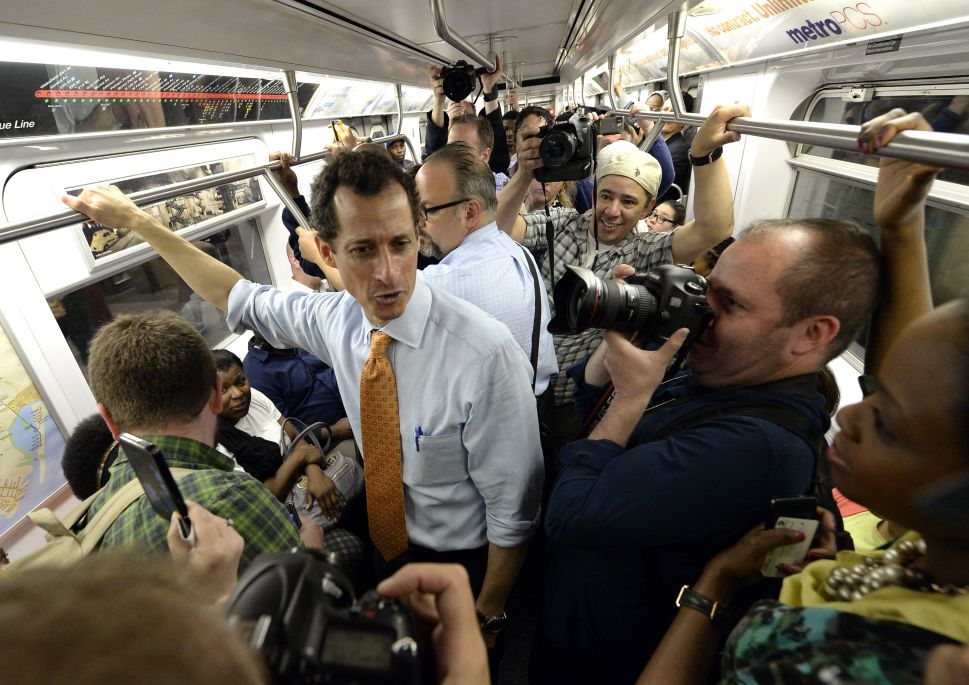