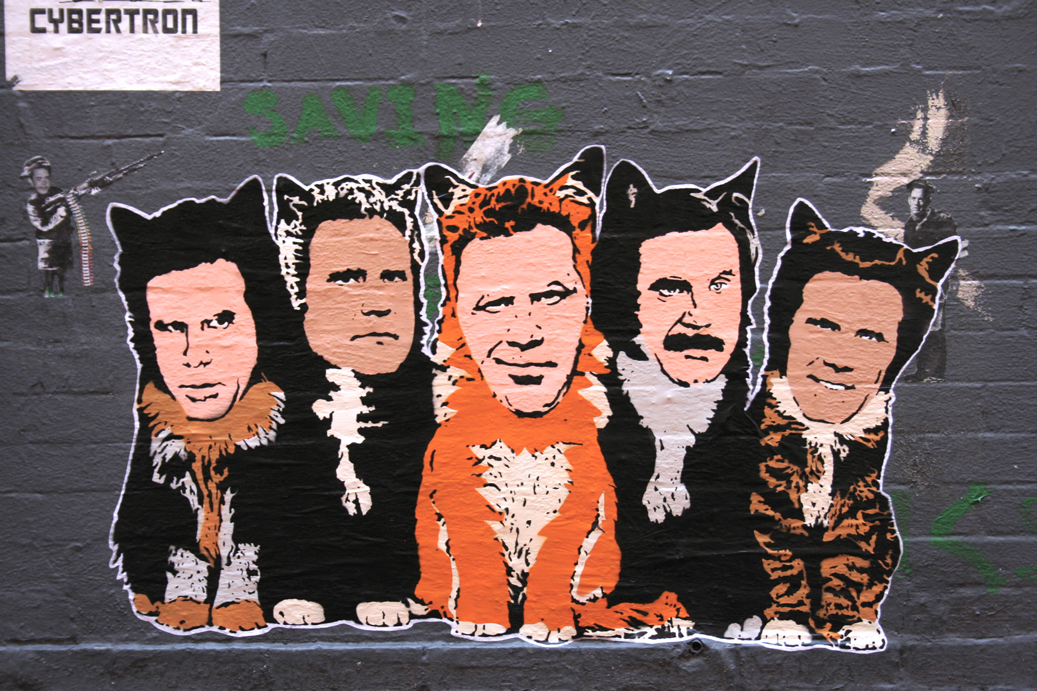 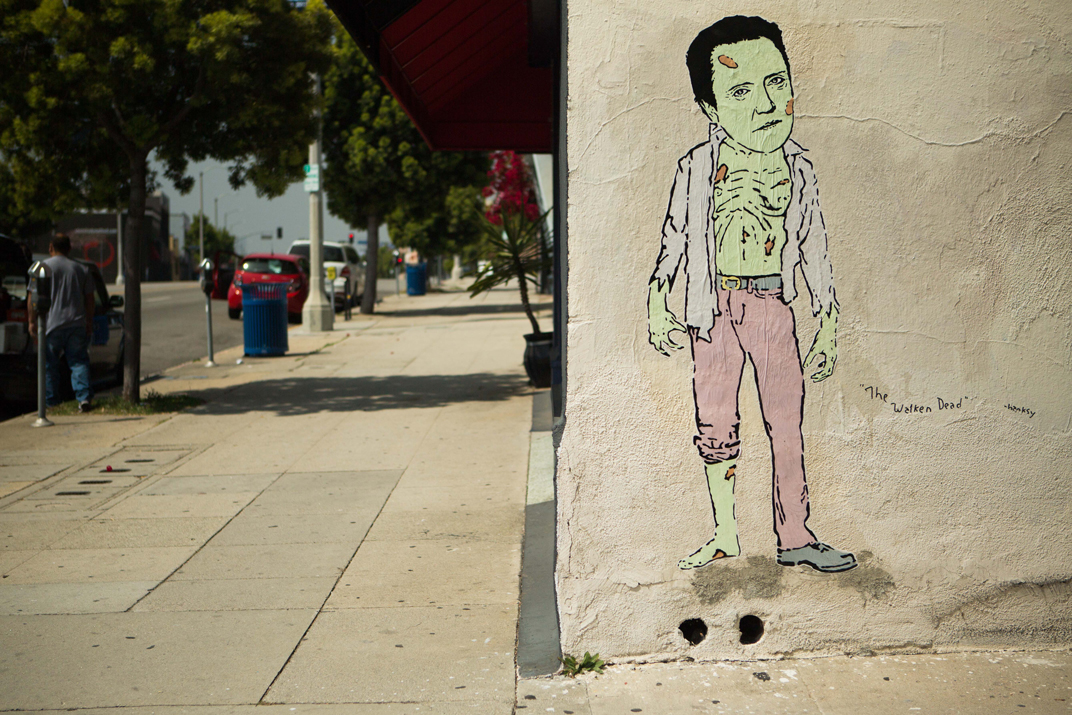 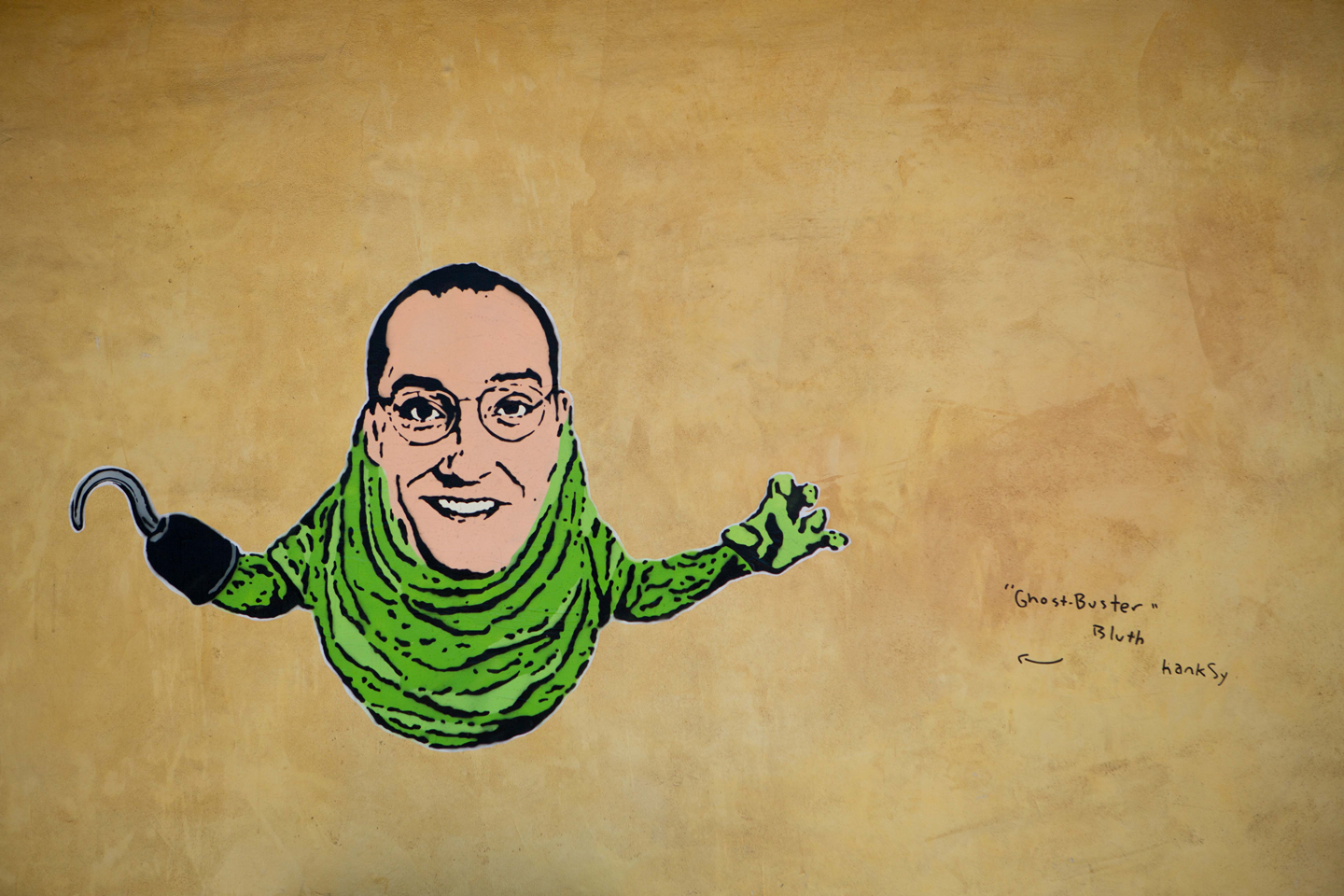 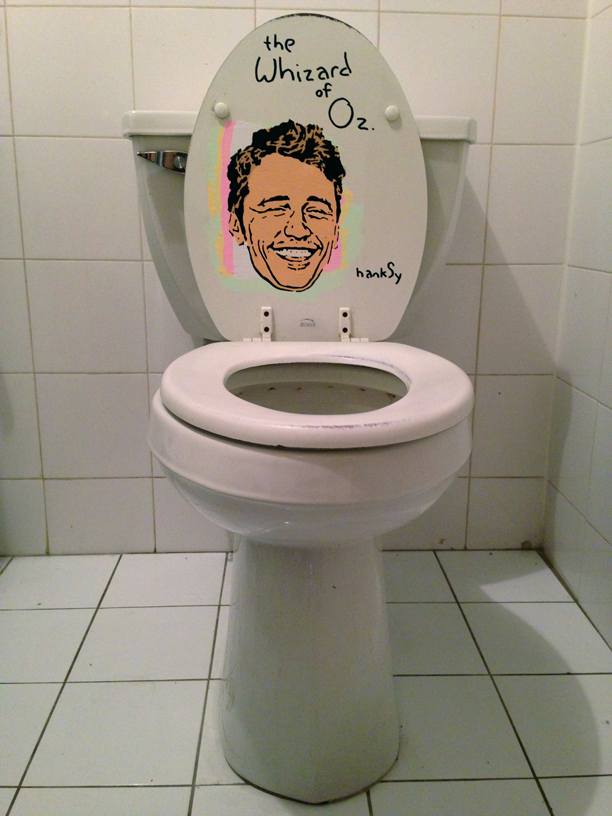 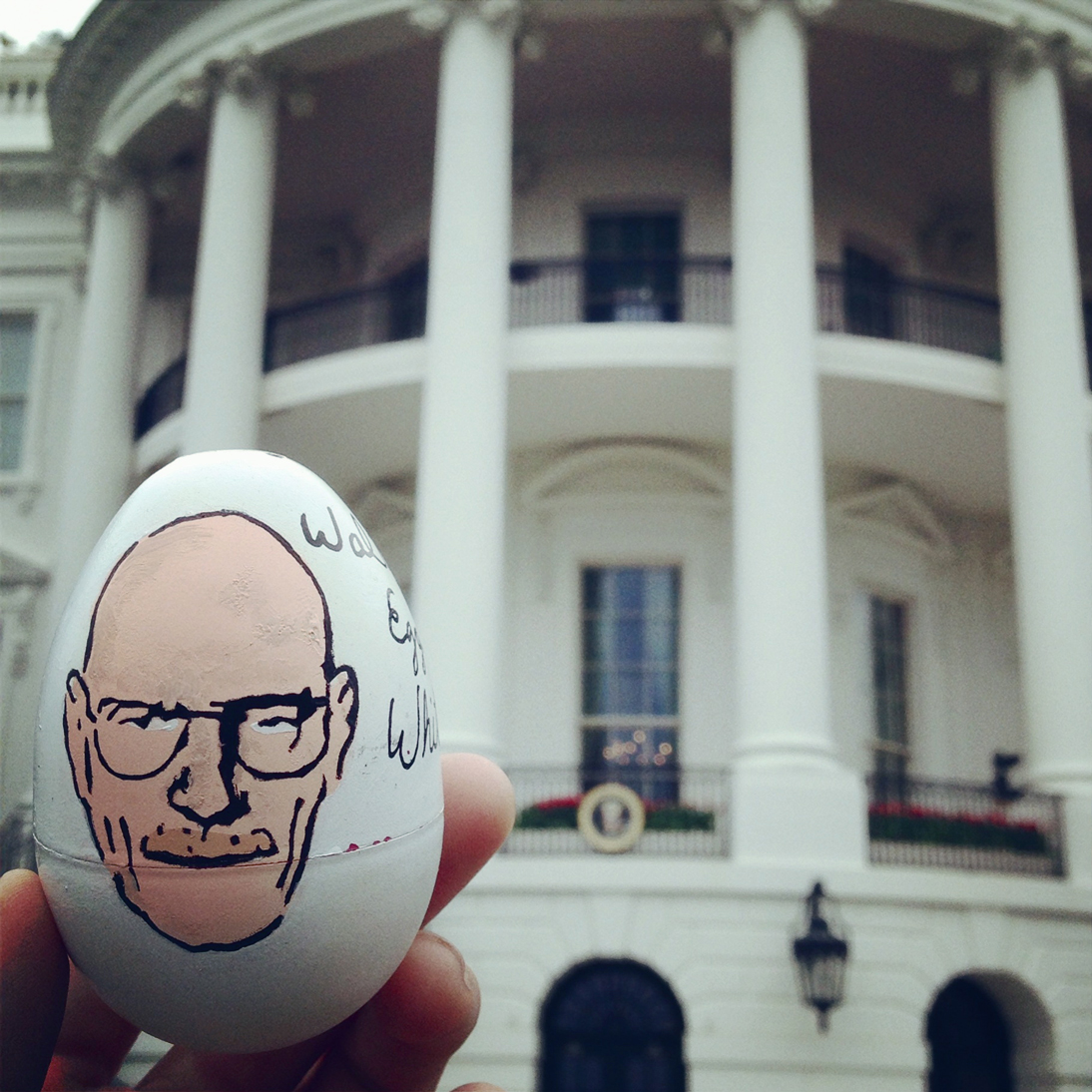 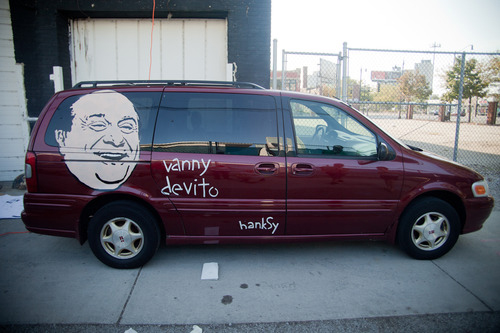 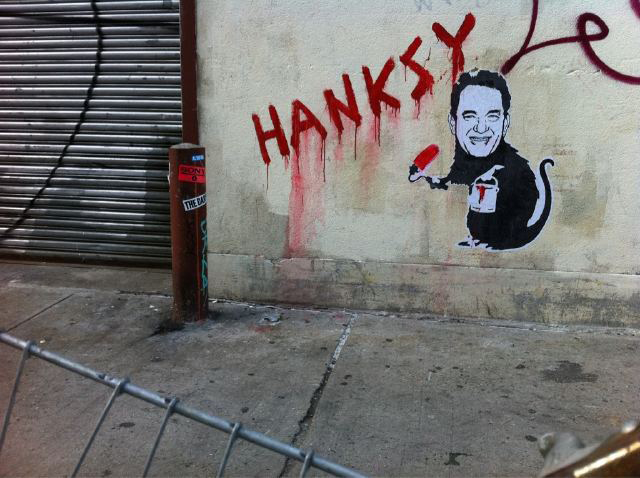 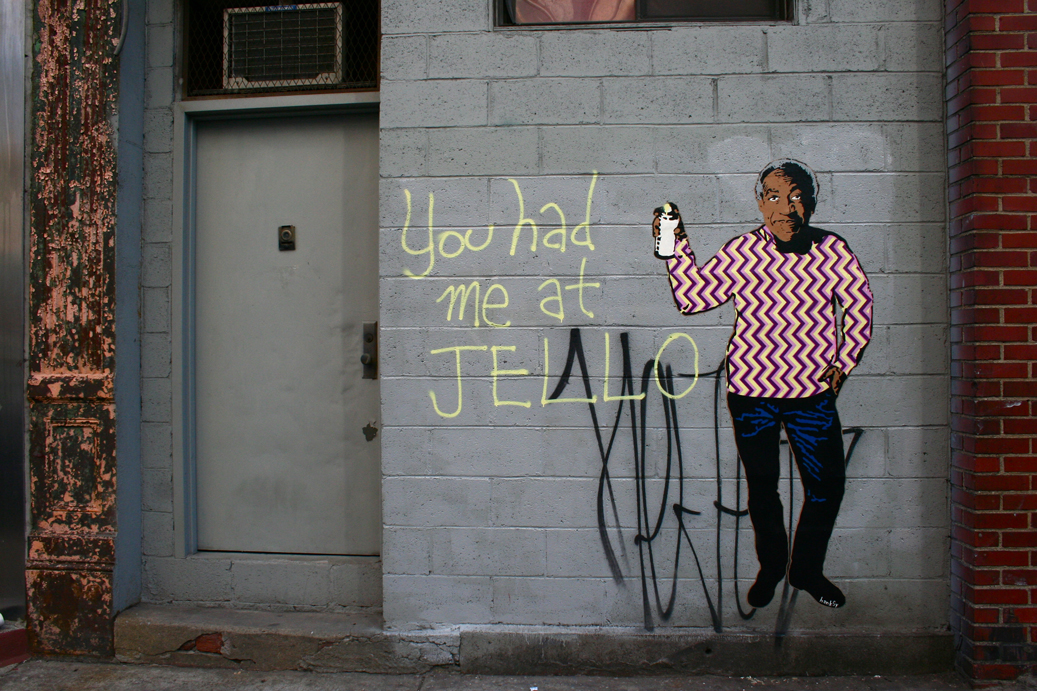 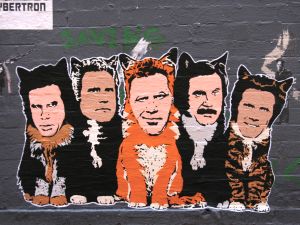 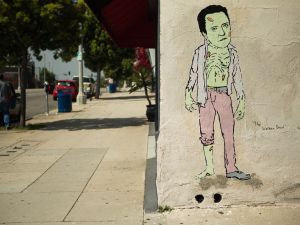 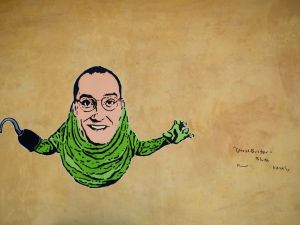 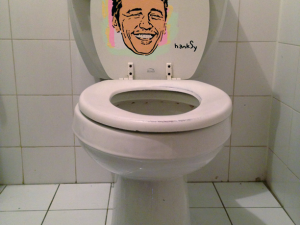 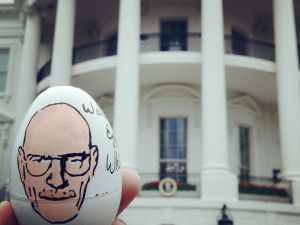 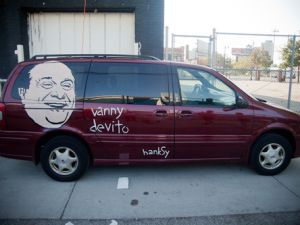 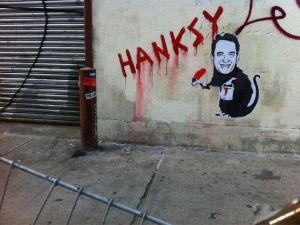 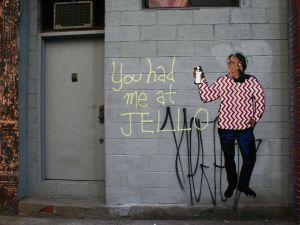 A few days ago, a new work of art popped up in the bathroom of Lower East Side’s Lost Weekend boutique. It is called “The Great Gatspee,” and it is a toilet seat with Leonardo DiCaprio’s face on it.

No, Marcel Duchamp has not risen from the grave to comment on pop culture.  It is the work of Hanksy, a pun-obsessed street artist who is taking the city by storm.

“I wanted to do a Leo piece for a while. I loved him on Growing Pains and even though he got all puffy and stuff in recent years, he’s still a damn great actor,” Hanksy told The Observer. “Originally I was going to coin the piece, ‘Leonardo DiCraprio,’ but I decided to be a bit more topical.”

A self-proclaimed “Street Fartist” who has been labeled the “Weird Al” of Street Art for his irreverent riffs on pop culture, Hanksy started out two years ago combining Banksy-like street art with Tom Hanks puns (Get it?!) Now, his punny celebrity repertoire has expanded beyond the Hanksian, targeting every corner of the zeitgeist from Iron Man to Arrested Development.

You may have spotted his work around the city, including pieces such as “Pie Hard” (Bruce Willis holding a stack of Pies,) “Stark and Recreation,” (Aziz Ansari’s head in Iron Man’s suit), “Ferrell Cats” (Will Ferrell’s face on cats), “Bi-Curious George” (Clooney in a monkey costume holding a rather phallic banana) and “Ghost-Buster Bluth”–you get the idea.

And new work is cropping up all the time in the city’s nooks and crannies.

“Literally every day he’ll send me some stupid pun that he thought of just on the fly. He’s always thinking of new work,” said his manager Brandon Rosenblatt.

After two sold out exhibits at New York’s Krause Gallery, Hanksy has taken to L.A. to promote his upcoming solo exhibition at Gallery 1988 , which opens May 24th. In addition to teasing the city with a range of murals, he even left L.A. another porcelain portrait, the precursor to Gotham’s own Gatspee: featuring James Franco as “The Whizard of Oz.”

“While it’s obvious I find bathroom humor amusing because you know, it’s child-like and awesome, I actually label myself a ‘fartist’ as a soft reminder to myself and those around me,” explained Hanksy. “I’m not taking myself too seriously and they shouldn’t either.”

And having emblazoned Leo’s face on the crapper doesn’t mean that he is pooh-poohing the real thing—rather, unlike our own Rex Reed, Hanksy is stoked to see Gatsby move from the toilet bowl to the Silver Screen (although for all his cultural cred, we’re not sure that he knows what the phrase “YOLO” means).

“I’ve read the book more than a few times, so I’m excited to see Luhrmann’s adaptation,” said Hanksy. “Although I’m still scratching my head over the fact that it’s in 3D. I mean, flappers and the Jazz Age all up in the audience’s business? Fitzgerald would be like, #YOLO am I right Zelda?”