In the plot they hope to leverage into the history books tomorrow, Fulop’s mechanics point out that it is now 32 years later, and Election Day Tuesday, tomorrow, will begin a new era in Jersey City.

Digging in against that narrative, the allies of Jersey City Mayor Jerry Healy rallied over the weekend at Healy’s favorite spot, Casino in the Park, attempting to project strength despite a clinging headline they claimed harmed the mayor in the closing stretch of this intense citywide contest.

“An assassination attempt,” a Healy backer growled, referring to a column in the Star-Ledger last week in which Healy recounted an incident from nine years ago, blaming three “Hispanic” women for trying to tug a towel off him on his front porch.

But even the mayor’s close allies had head-in-their-hands voices as they wondered why Healy would give the answer he did, acknowledging their candidate’s self-inflicted wound even as they tried to make the case that City Hall-backed GOTV will win it for Healy.

The mayor’s forces moved swiftly to stifle the gaffe.

As the mayor rallied under the broad, outstretched arms of U.S. Rep. Albio Sires (D-8), New Jersey’s lone Hispanic congressman, Fulop partisans tried to get as much traction as possible out of the story that Healy made the dumbest comment in the history of Hudson County politics with a week and change until Election Day. Part of Fulop’s effort included the message that Healy is insensitive to Hispanics.

In what many insiders see as a close race, a discouraged Latino vote for Healy could damage the mayor.

Insiders see the key to Fulop’s victory consisting of the candidate driving monster turnout numbers in his home ward downtown, keeping it even in Healy’s home base of the Heights and using the mayor’s Ledger flub to depress the Hispanic vote there, while letting former Seton Hall University basketball star Jerry Walker sap Healy’s African American strength in Ward F.

Running as the Democrat, Healy has localized his President Barack Obama endorsement by turning the race – as much as he can – into a partisan election. His allies – Councilwoman Viola Richardson among them – have depicted Fulop as a privatizer whose presence in City Hall will result in the loss of public sector jobs.

Healy’s allies – starting with firefighters, cops and public workers –are driving the message that a vote for Fulop represents a vote for Wall Street and Republican interlopers.

But now they have another flank to cover. In late afternoon Monday, Sires began walking with Healy in Latino neighborhoods in the Heights, in part to try to offset the Ledger damage.

It’s been a competitive election to this point.

A two-term mayor, the mayor started gaining traction in the race when he won the endorsement of Obama in late March. His team promptly unloaded a sign campaign featuring the linkage between the President and the Mayor. A month later, Fulop went negative in a television ad, reminding voters about convicted members of the Healy administration and Healy’s diner encounter with disgraced developer Solomon Dwek, who gave cash to Deputy Mayor Leora Beldini, later jailed. Fulop started hitting Healy hard on the subject at public events.

Healy in return questioned his challenger’s acceptance of campaign cash from broker Fairview Insurance, and demanded Fulop release emails containing all correspondence by Fairview, which won the contract with the school board, which Fulop controls politically. Healy had introduced the Fairview issue earlier in the campaign, bludgeoning Fulop in anticipation of the challenger’s intensified Dwek attack. Healy’s allies felt energized by the notion that they had muddied Fulop sufficiently to make it an even race. Fulop hardly saw the two cases as comparable.

Fulop continued aggressively driving the Dwek attacks through Healy’s calls on him to cease and detest. He depended also on a television advertising influx supplied by B4K, a schools reform outfit supported by billionaire hedge funder David Tepper.

Healy displayed his strength as a people’s champion when he attended a rally staged late last month by Jersey City Medical Center workers, who will help the mayor with get-out-the-vote operations in a show of gratitude for the mayor’s support for their pursuit of a fair contract.

Fulop’s own GOTV machine – battle tested through local ward races and school board elections – received the added firepower of the Carpenters Union.

Worried in the closing days with Fulop dominating the message, Healy’s allies nonetheless point out that the political establishment never counted on their man being in a contest to begin with, and there beside the mayor at the Casino Saturday to drive that message was craggy U.S. Rep. Bill Pascrell (D-9).

Democrats counted out the Paterson-based Pascrell in his primary bid last year against Steve Rothman, whose suburban Bergen County portion of the newly configured 9th District added up to bigger raw vote totals for Rothman. But Pascrell drove enormous numbers out of Paterson to flummox Rothman’s suburban vote and shock the state.

Now Healy’s people want to see the mayor’s city hall base as Paterson and Fulop’s wealthy downtown vote as the equivalent of the Bergen suburbs. They hold out hope that Fulop’s voters won’t be as motivated as their own people, who see the challenger as a threat to their jobs.

Last week on the street not far from the mayor’s Oakland Avenue headquarters, PolitickerNJ.com encountered two men who said they had lived most of their lives in Jersey City.

Who are you voting for?

They both said, “Fulop.”

One removed his cap and pointed to the slogan over the bill: “Vietnam Veterans.”

Channeling history, Fulop maintains that he has penetrated all the city’s wards and won’t need to pin everything on Ward E to beat an incumbent too worn down now to win.

But most still see the challenger needing to start strong where he lives. “Should know by 9 a.m. tomorrow,” a Hudson source told PolitickerNJ.com. “If downtown doesn’t have record numbers immediately following morning commute, Jerry is still in the game.” 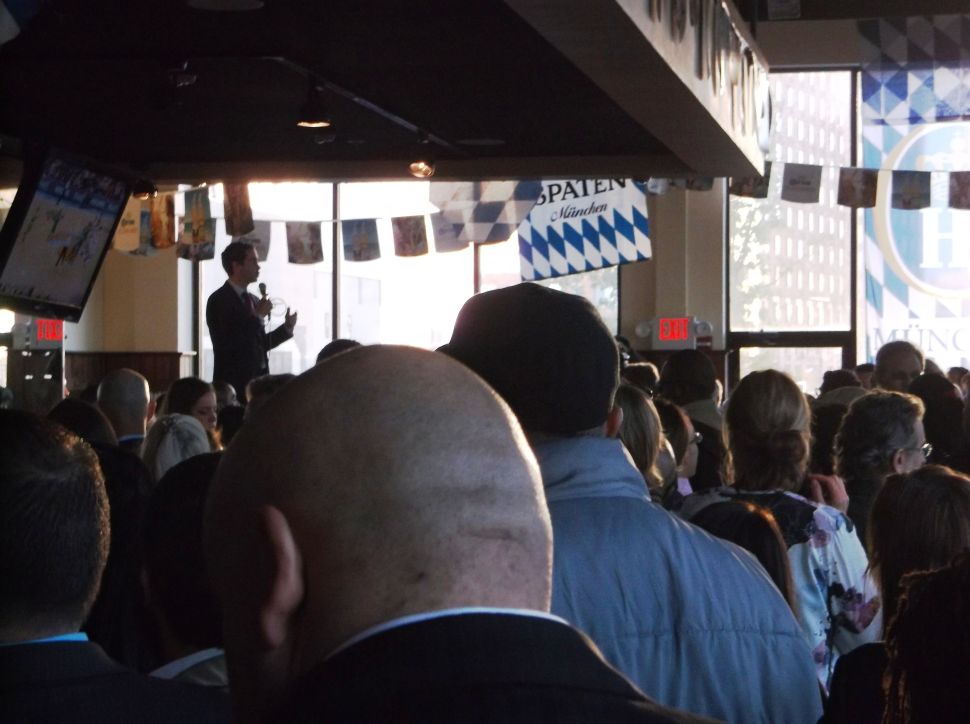