To Essex County Democratic Party insiders, the time has come Tuesday for Mark Alexander to walk into the buzz saw of Joe DiVincenzo’s Democratic Party line, which would protect even the re-election status of the Invisible Man.

In this case, actual candidate state Sen. Nia Gill (D-34) has the enviable spot on the ballot, as she attempts to win re-election by beating Alexander, a former statewide director of Obama for President.

It’s a mud-fight down the stretch of the Democratic Primary, with both Montclair residents pummeling each other, Gill landing the harder shots with two mail pieces calling into question Alexander’s commitment to public school education.

“The Alexander campaign has some nerve accusing others of being negative,” said Gill campaign manager Eric Hyers. “Ask them about their outrageous claims. Our mail focuses on the issues, not nasty personal attacks.”

An opponent of the Opportunity Scholarship Act, Gill pounced on Bishop Reginald Jackson’s endorsement of Alexander.

Jackson said at the time that he is done with politicians who won’t examine the possibility of examining alternatives to existing public education structures, code, said Gill, for vouchers.

“He is supported by people who are leaders in the voucher movement,” Hyers said. “One such endorser even explicitly said he was endorsing Mark because Senator Gill didn’t support vouchers. On his own website he advocated for one specific program (MFTC) that the right-wing group ALEC created and that the NCSL refers to as a voucher. Just a few weeks ago, Mark Alexander said ‘pilot programs for OSA may be one option.’ He is trying to have it both ways.”

But the challenger has his own issues with Gill, and said so in a mail campaign aimed at draining the incumbent while beefing up his own independent Democratic Party credentials.

“I wouldn’t call it negative,” Alexander Campaign Spokesman Matt Jordan said of their effort. “We’re simply pointing out that Gill is selling out to the bosses by taking a no-bid government legal contract. It affects how she votes, as in the case of her vote on NJN (public television).”

“She cast a deciding vote to close NJN, a valuable source of news,” Jordan said.

DiVincenzo’s machine stands in the corner of Gill, never a party player whose lack of support from district mayors and organization types dovetailed with the Star-Ledger’s rejection of her re-election candidacy and preference of Alexander, a Seton Hall University law professor.

Throughout the campaign, Alexander’s attempt at a checkpoint to the Democratic Party line and Gill’s additional support in the form of ticket-mates Speaker Sheila Oliver (D-34) and Assemblyman Tom Giblin (D-34), burnishing strong brand names in East Orange and Montclair/Clifton respectively, has been to highlight his 20-year friendship with President Barack Obama.

Essex insiders have a two-word retort to that: Jerry Healy.

The Jersey City incumbent mayor ran a re-election campaign designed around Obama endorsement imagery, only to find himself impaled on Election Day.

A year ago, then incumbent-U.S. Rep. Steve Rothman (D-9) tried to run on a message of Obama love, and fizzled.

“To compare our race to Jerry Healy or Steve Rothman is apples and oranges,” Jordan said. “Mayor Healy taken on by a strong challenger in Steve Fulop had nothing to do with Obama.”

If Gill has trouble with Alexander going, in her view, negative, she need look no farther than her own camp to find the same vibe.

The allies of East Orange mayoral challenger Lester Taylor have reinforced his campaign against veteran incumbent Mayor Bob Bowser with the argument that the mayor’s extracurricular marital activities have compromised the district’s largest municipality.

Alexander and Bowser have campaigned together in East Orange’s senior-rich high rises but Bowser has spent much of the campaign swatting aside attacks against his personal life rather than fiercely bullet pointing the reasons why Gill needs to go.

Attempting to get a grassroots Democratic Primary vibe in motion, Alexander allies have groused in public about DiVincenzo’s liplock with Republican Gov. Chris Christie. 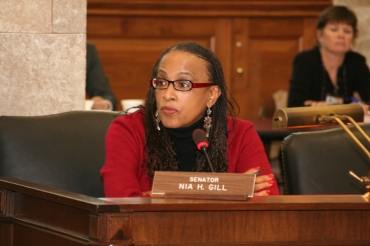