Several years ago, the Belgian sculptor Berlinde De Bruyckere was driving to her country house in Burgundy, France, when she came across what was left of an enormous tree that had been uprooted by a storm. Last November, she wrote about that experience in a letter to the South African-born, Adelaide, Australia-based novelist J.M. Coetzee. “The image came to mind of a collapsed cathedral, the roof vault thrown to the floor. …The tree ripped to pieces (a symbol of life, unrecognizably destroyed), the collapsed cathedral, the limitations of the human being…”

That letter and others between the artist and writer are reprinted in the catalogue for “Cripplewood,” Ms. De  Bruyckere’s presentation in the Belgian pavilion at the 55th Venice Biennale, which opened to guests of the Biennale’s preview this week. The invitation for Ms. De Bruyckere to represent Belgium came last July, she told The Observer in an interview at the pavilion on Wednesday. Given the time-consuming nature of her practice, she wanted to work with a curator who would provide a sense of continuity. She had recently finished a book project with Mr. Coetzee—she’s long been given to collaborations with artists from other disciplines, such as dance—and felt the relationship could continue to be fruitful. So she invited him to be the pavilion’s curator (the commissioning entity is Ghent, Belgium’s S.M.A.K. museum) in an atypical process: he would provide a text, and her work would react to it.

The short story he sent to her, also reprinted in the catalogue, is called “The Old Woman and the Cats,” and tells of a man visiting his elderly mother in a small village in Spain. His mother has opened her home to a dozen cats, which she takes care of, along with the local exhibitionist, a mentally disturbed man whose family abandoned him and who would otherwise have been taken in by social welfare. The mother, who is nearing death, tells her son, “I am preparing myself for the next move…The last move….I am accustoming myself to living in the company of beings whose mode of being is unlike mine, more unlike mine than my human intellect will ever be able to grasp.” After reading the story, Ms. De Bruyckere wrote Mr. Coetzee the letter about the tree.

“She takes care of people without value anymore,” Ms. De Bruyckere said in the pavilion, speaking of the character in the story. “That’s what I’ve translated into this work, a huge body, laying down, that has been attended to by nurses who came by…. There are wounds, and there are people who take care of those wounds.”

Her sculpture, a sprawling jumble of branches attached to a gnarled tree trunk, all cast in wax, resembles a supine body—a human’s, or that of a giant, beached squid. For the wax of the branches and tree trunk, she used the same color she  uses in her human-like figures, giving the tree parts the appearance of flesh. She has wrapped pieces of fabric around the knobs and ends of many of the branches, like bandages on broken limbs.

In person, Ms. De Bruyckere is dwarfed by the largest sculpture she has ever made, so large that she had to cast it in 29 separate parts. Her bearing can’t help but reflect the severity of her sculptures. She is petite, with pixie-cut brown hair. Discussing her work in English, she takes care to repeat and rephrase things until it’s clear that, despite communicating in her second language, she has gotten her point across. The previous summer, she explained, she’d brought to her Ghent studio from France an elm similar to the one she’d seen destroyed by the storm, and begun making wax casts of it. “I was touched by its having been uprooted,” she said. “People who are uprooted, you never can really place them again. It’s much more violent than cutting a tree down. Uprootedness gives a feeling of loneliness.” She also began casting smaller branches collected from a group of dead trees that she found near her studio. Pointing to the piece, she indicated the holes and pock marks on the wood. “There were animals living inside, and birds.”

The Coetzee story also gets at themes of uprootedness. The mother explains to her son how she decided to take care of the village’s cats after encountering one giving birth in a dirty culvert. “I don’t want to live in a world in which a man wearing boots will take advantage of the fact that you are in labour, helpless, unable to escape, to kick you to death. Nor do I want a world in which my children or any other mother’s children will be torn away from her and drowned because someone has decided they are too many.”

Working with the themes in Mr. Coetzee’s story, Ms. De Bruyckere also began to think about Saint Sebastian, an image which, in Venice, has associations with the many outbreaks of the plague. A body, she said, “became very visible in the tree, and how you discover the skin under the bark. For me it’s one big body lying down who needs help, and then nurses came and put the bandages around it.”

Those holes in the wood, made by animals, play a role here. In his essay in the catalogue, Herman Parret writes, “The arrows that penetrate the body of Sebastian are considered in the popular imagination to be like the plague that swoops down upon the human race. The buboes of the plague victims are considered analogous to the wounds left in the flesh by the point of an arrow. And, since the saint survived martyrdom by arrows, Sebastian became a protector against the plague…” He also provides some tough-to-stomach information about those buboes: “Death by plague was horrible. Once the blood was infected, buboes and carbuncles appeared all over the body, and weather usually followed by the fourth day.”

Indeed, the whole atmosphere of Ms. De Bruyckere’s pavilion is meant to evoke certain darker aspects of Venice, the water-logged Venice of ruins, mold, decay. The walls have been painted black and black fabric, riddled with pin pricks, that blocks the pavilion’s skylight calls to mind spores of mold. “When I walk around Venice,” she said, “I see all these beautiful palaces, but they are losing their walls and roofs and being swallowed up by water. For me an important thing is to have this dark atmosphere.”

There are unlit spaces off to the sides of the pavilion, like the dim aisles of a cathedral. She explained that she kept these nooks empty so that people could move away from the piece, lean against the wall, and take their time looking. “…I will try to capture in words what the work for Venice is about,” she wrote to Mr. Coetzee. “It’s about putting ugliness alongside beauty, light beside darkness. About bringing back memories.”

In Mr. Coetzee’s story, the mother tells her son to be careful with language. “Take care of… Be careful, John. In some circles take care of means dispose of, means put down, means give a humane death.” When you approach Ms. De Bruyckere’s pavilion, the sculpture inside is obscured by a dark wall; what you encounter at first is nothing but an empty black hole. “You don’t know what you’ll see,” she said, “and it makes you a little bit afraid.” 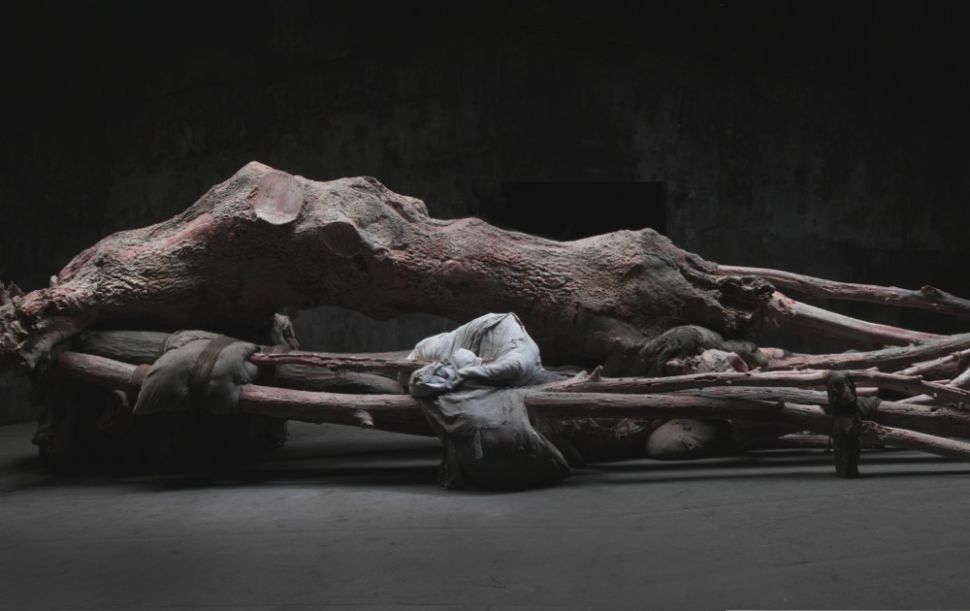 Filed Under: Arts, galleristny in venice