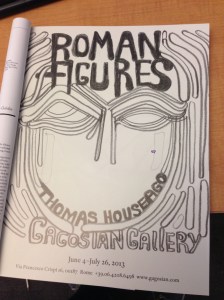 Michael Werner Director Gordon VeneKlasen confirmed that the break happened about a year ago, writing in a short e-mail, “I’d rather talk about the artists I do work with rather than comment further on this.”

In 2011 the artist joined Hauser & Wirth in London (earlier this year, the gallery opened a new 23,000-square-foot space in Chelsea). This month’s issue of Frieze magazine includes an announcement that Gagosian Gallery will host a Houseago show at its Rome branch from July 4 through July 26. Mr. Houseago also currently has a show up at the Storm King Art Center, in Mountainville, N.Y., which runs through Nov. 11.