Where this guy’s going, he don’t need roads.

A time machine has been spotted in the Bronx.

The important discovery was made by intrepid location scout/ time scientist Nick Carr of scoutingny.com, who saw the vehicle over the weekend on Arthur Ave in Belmont.

“This probably isn’t what you picture when you think of a time machine,” Mr. Carr wrote. “In fact, it sort of seems like just a crappy car with a bunch of random shit stuck on.”

The Observer was skeptical but excited. We present our analysis below: For a start, time machines need smiley faces. This is just basic physics.

Preferably ones with the “daylighter” logo as a mouth.

To explain this we’d have to go heavily into string theory, so we won’t. The real science behind the vehicle is in the choice of car.

After the late eighties, it was discovered that DeLoreans only worked for time time travel in films, whereas in real-life one needs a Mercedes / Lamborghini with a couple of extra logos thrown on just in case.

It also confirms that, as we suspected, hybrids are the future. One of the most exciting discoveries about the device was that it might be an early prototype for the Google StreetView Car.

Except this one can only see the sky above the car, which is no help to anyone.

Unless in the future they’re making Google SkyView, their most boring application yet. Everyone knows that feeling when you’re travelling through time, you forget Einstein’s theory of relativity, and you’re all like urgh, gosh.

Well luckily this model comes with handy reminders, so you know, you can keep doing all that time travel. Sometimes, travelling through time and space can be a bit gloomy.

Fortunately, this particular model comes with extra headlights glues onto the existing ones. Please don’t ask me how they work. 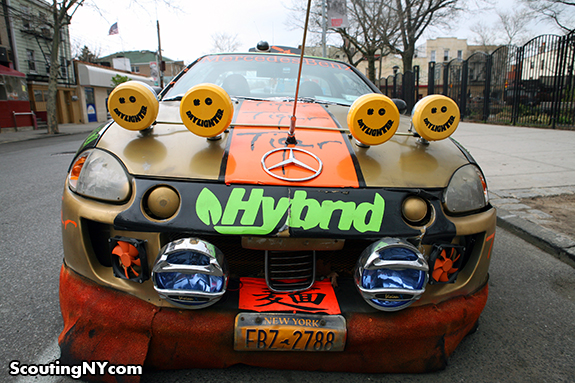 Filed Under: Entertainment, Bronx To The Future