Here’s the bold—and only—prediction I’ll make about this year’s Tony Awards, to be presented at Radio City Music Hall a week from Sunday and broadcast on CBS: I think it’ll be a good show.

That’s a risky proposition, pre-emptively declaring the success of an awards show—any awards show, never mind this perennially little-watched one—when so much so often goes wrong. But the Tonys have been on an excellent run lately, I’d like to think emboldened by its producers’ recognition of that small audience.

The basic tension of the Tonys telecast has been that while the event is fundamentally a celebration of what goes on in a small slice of Midtown West, it is also a three-hour advertisement. The worst moments, for people who are actually New York theatergoers, come when the sales pitch becomes overwhelming, with constant, hoary paeans to the magic of live theater, repeated exhortations to come to New York, multiple reassurances of family-friendliness and, worst of all, easy-to-swallow musical performances from seasons-old shows that aren’t even up for awards (but are on tour, profitably). It has often felt like a TV show about theater made for people who watch movies.

But in the last two years, with the incomparable Neil Patrick Harris as host—he is the best awards-show host today, who brings with him a healthy dose of friendly irony and who is, conveniently, both a legitimate Broadway showman and the star of a CBS sitcom—the pitching seems to have been toned down and the genuine celebration turned up. “Very haimische,” was my verdict on The Observer’s live blog two years ago. (And that was before last year’s opening number introduced a lawn-mowing Patti LuPone.) That CBS has just committed to an unprecedented five-year renewal with the Tonys folks suggests the network is happy.

This is, of course, all thanks to your humble reviewer. There is “unnecessary pressure to interest the rest of the country in what ought to be a night for people who actually care about theater,” I kvetched on New York magazine’s Vulture blog the morning after the 2009 Tonys. My solution? “Just put the thing on Bravo, get a better director, and let Liza ramble for as long as she wants.” It’s not quite on Bravo—yet—but it has become a show for people who care about theater.

What else do I think should happen? I won’t bother predicting who I think will win the eight key Tony Awards 10 days from now—that’s too hard to do, and it’s too easy to be proven wrong—but I’ll tell you to whom I’d give them.

Best Actor in a Play: Tom Sturridge, Orphans. He’s the lowest-profile actor in the category, and his play had a short and not very successful run. There are respectable arguments for his competitors—Tom Hanks’s pleasantly unshowy Broadway debut in Lucky Guy, Nathan Lane’s layered performance in The Nance, Tracy Letts’s compellingly defeated take on an iconic role in Who’s Afraid of Virginia Woolf? and David Hyde Pierce’s sensitive emotional dexterity in Vanya and Sonia and Masha and Spike—but Mr. Sturridge’s virile, catlike, offbeat performance in Orphans is what has stayed with me.

Best Actress in a Play: Laurie Metcalf, The Other Place. This category is perhaps the toughest of the season, with five fine performances from five indefatigable actors. (The other nominees are Amy Morton for Virginia Woolf, Kristine Nielsen for Vanya and Sonia, Holland Taylor for Ann and Cicely Tyson for The Trip to Bountiful—illustrating the point that Bette Midler’s lack of a nomination was not a snub so much as a traffic jam.) I could make a persuasive case for Ms. Nielsen, based only on the phone-call scene near the end of her play, or for Ms. Tyson, miraculous and moving eight times a week, even at 79. But Ms. Metcalf, as a brain researcher slowly losing her mind, gave a riveting performance that turned a flawed play into searing portrayal.

Best Actor in a Musical: Bertie Carvel, Matilda. Sure, Santino Fontana makes a handsome and charming prince in Rodgers and Hammerstein’s Cinderella. And Billy Porter is a ferocious drag queen, and Stark Sands a surprisingly affecting square, in Kinky Boots. (Rob McClure, an excellent Charlie in the otherwise unexcellent Chaplin, is the final nominee.) But Mr. Carvel, padded like a linebacker and costumed like a cross-dressing Nazi, makes a hilariously scary, scene-stealing Miss Trunchbull in Matilda. A hammer-throwing, child-taunting headmistress, Mr. Carvel’s Trunchbull is a special creation.

Best Actress in Musical: Patina Miller, Pippin. Laura Osnes, as the princess-to-be in Cinderella, is charming, lovely and generally delightful. But the role is also that of a standard-issue Disney princess. Valisia LeKae does a regal turn as the regal Diana Ross in Motown. But it is an impression. Patina Miller—leggy, swivel-hipped, sultry—steps into a role made famous by Ben Vereen and makes it her own. (Stephanie J. Block in The Mystery of Edwin Drood and Carolee Carmello in Scandalous are the other nominees.) Diane Paulus’s circus-meets-stage production of Pippin was the most enjoyable Broadway musical of the season, and Ms. Miller shows those clowns what a Broadway hoofer can do.

Best Revival of a Play: The Trip to Bountiful. Lincoln Center Theater’s revival of Clifford Odets’s boxing melodrama Golden Boy was, in a word, worthy: loving, rough, sprawling and beautifully acted. The Steppenwolf production of Edward Albee’s landmark Who’s Afraid of Virginia Woolf was even more than that: revelatory, too. But Horton Foote’s The Trip to Bountiful, impeccably designed and directed by Michael Wilson, was the only play revival that left me surprised and surprisingly moved. (Orphans is the final nominee.) Mr. Foote’s often-sentimental works don’t usually get to me, but this one did.

Best Revival of a Musical: Pippin. A gloriously joyful and over-the-top staging of a messy Stephen Schwartz musical, with bravura turns from Broadway vets (Andrea Martin, Charlotte D’Amboise) and circus strongmen (Orion Griffiths, Philip Rosenberg) alike and sexy, mostly-Fosse choreography, Ms. Paulus’s Pippin was the most fun to be had on Broadway this season. Sorry, Annie, Edwin Drood and Cinderella, but you don’t stand a chance.

Best Play: Vanya and Sonia and Masha and Spike. Correction: Pippin was the most fun to be had at a Broadway musical. Christopher Durang’s Vanya and Sonia and Masha and Spike is an awfully good time, too. The brilliantly witty and unexpectedly sweet off-kilter comedy, which places Chekhovian themes—and grown siblings named after Chekhov characters—in Bucks County, Pa., is so funny, so clever and so subtly substantial that its only serious competition, Richard Greenberg’s very pleasant and intentionally old-fashioned The Assembled Parties, seems, well, old-fashioned.

Best Musical: Matilda. The only contenders here are Kinky Boots and Matilda. (The other nominees, Bring It On and A Christmas Story, each long closed, would both be described as remarkably good for what they are—a teen-oriented movie-to-musical and a holiday-season movie-to-musical, respectively—suggesting that they are not the sort of thing that wins the Best Musical Tony.) Kinky Boots is British and charming and hopeful and has a great score; Matilda is British and charming and hopeful and has great staging. But one is traditional and predictable; the other is a burst of dark, disturbing (but still happy!) fresh air. Matilda, this one’s all yours. 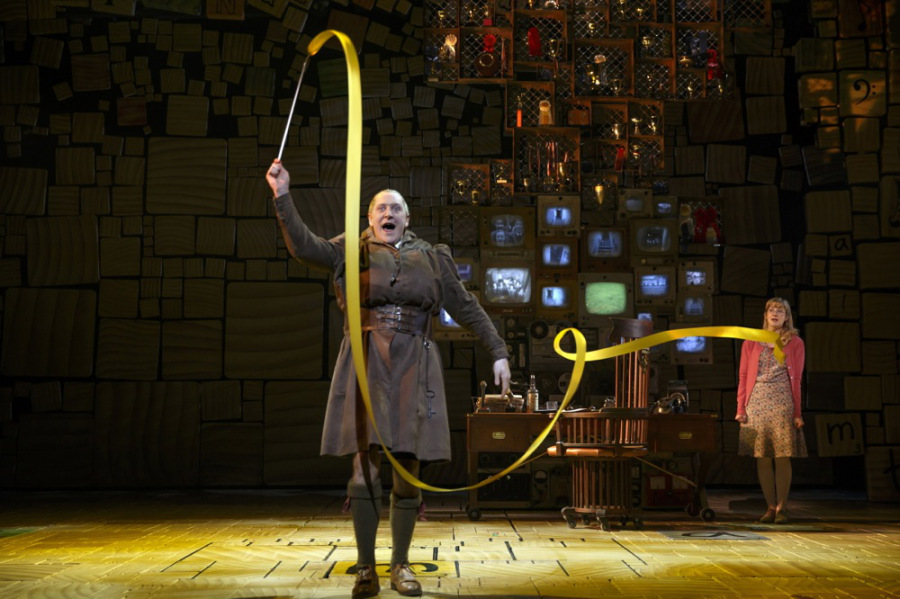