State Sen. John Sampson will be arraigned Monday afternoon in federal court for his alleged involvement in a brazen embezzlement scheme, involving an elaborate cover-up and an attempt to use stolen cash to fund his campaign for Brooklyn District Attorney, investigators revealed Monday.

According to prosecutors and an indictment unsealed this morning in federal court, Mr. Sampson abused his position as an attorney supervising foreclosed properties for years and allegedly embezzled approximately $440,000 between 1998 and 2008 from escrow accounts he was charged with watching over. He then tried to use some of that money, they charged, to fund his own campaign to become Brooklyn’s top prosecutor. Further, Mr. Sampson allegedly engaged in an extensive scheme to try to hide the his illegal conduct, threatening witnesses and reaching into the U.S. Attorney’s Office to try to tamper with evidence.

“Today we have unsealed a nine-count indictment that outlines a pattern of self-dealing and corruption that spans decades and covers several events, including the defendant’s failed bid to become the Brooklyn District Attorney,” U.S. Attorney for the Eastern District of New York Loretta Lynch said during a press conference announcing the charges, where she described Mr. Sampson’s alleged conduct as “one of the most extreme examples of political hubris that we have yet seen.”

Particularly stunning, she said, was Mr. Sampson’s attempts to thwart the investigation into thefts. After an unnamed associate’s arrest, she said, Mr. Sampson tried to obtain confidential information about the investigation, “going so far as to counsel lies and the hiding of evidence. At one point, he was recorded saying that if he was able to find out the identities of several cooperating government witnesses, he could arrange to ‘take them out.”

Mr. Sampson also appeared completely unaware of the severity of his alleged actions. During one point, he was interviewed outside his Brooklyn home by FBI agents, who accused him of lying to federal agents–a federal crime. When he was asked whether he wanted to revise his statements, he allegedly replied, “Not everything I told you was false.”

The latest arrest comes weeks after the indictments of a slew of other state and city officials on corruption charges, including State Sen. Malcolm Smith, ex-Assemblyman Nelson Castro and City Councilman Daniel Halloran.

“Today we add one more name to the ever-lengthening list of corrupt new York officials,” said FBI Assistant Director-in-Charge George Venizelos, who castigated officials for failing the public. “At a bare minimum the people have a right to expect and demand that their elected representatives at least obey the law … It’s clear that too many of them are self-serving and not serving the public,” he said.

Still, Ms. Lynch hinted more arrests are to come. She noted that the current charges against Mr. Sampson are unrelated to material that may have been gathered from reportedly damming wiretaps collected by ex-Sen. Shirley Huntley.

“I can say the investigation is continuing,” said Ms. Lynch.

Mr. Sampson has served in the State Senate since 1997, and until December, served as leader of the Senate Democratic Conference. After the arrest, the lawmaker who replaced Mr. Sampson as the head of the Senate’s Democratic conference, Andrea Stewart-Cousins, acted swiftly by stripping him of rank and privilege.

Mr. Sampson, who is charged with two counts of embezzlement, five counts of obstruction of justice and two counts of making false statements, is set to be arraigned later Monday afternoon in Brooklyn. If convicted, he faces up to ten years in prison for each of the embezzlement charges, ten years for one of the obstruction of justice charges and up to 20 years for the others. He could get an additional five years for each false statement charge. 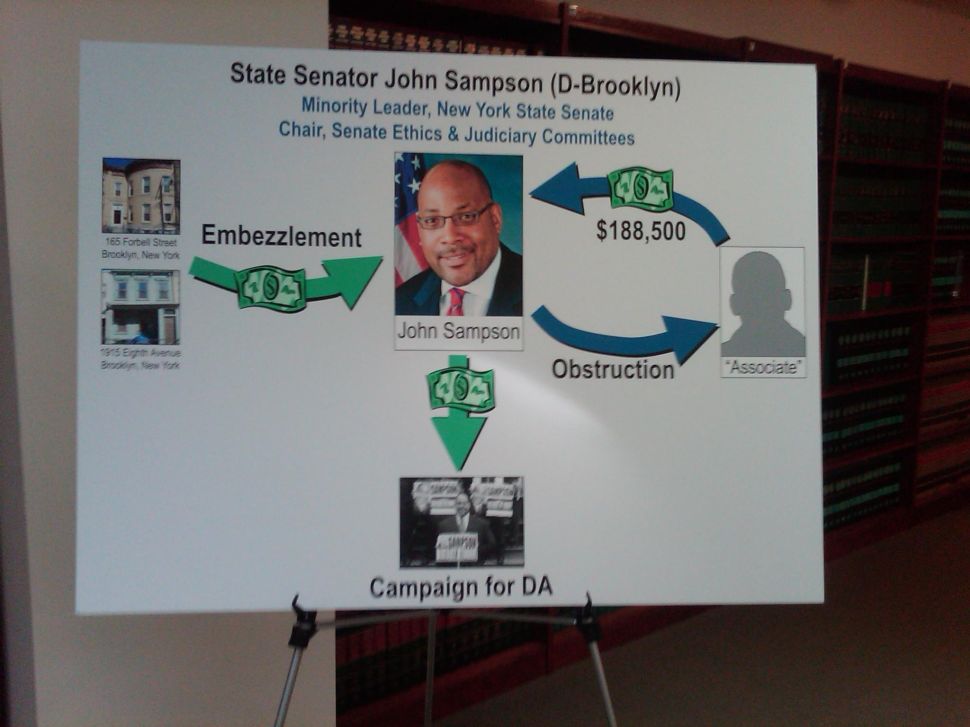